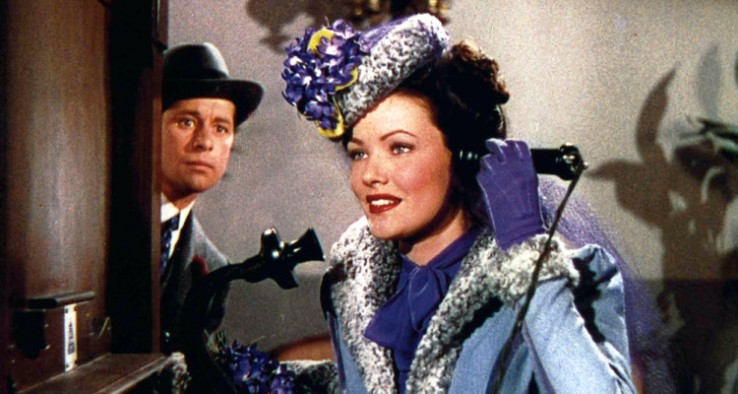 The big news at this year’s Oscar ceremony is the expansion of the Best Picture category from five nominees to ten. After the near shutout of THE DARK KNIGHT from major awards in 2009, it’s an effort by the Academy to shoehorn some money makers onto the show to goose ratings. And while the world-devouring AVATAR would have been nominated in a field of one, hits like DISTRICT 9 and THE BLIND SIDE certainly benefited from the change. This is no innovation however – there were ten best picture nominees from 1937 – 1944 (it varied between 3 – 12 before then). They cut it down to five nominations in ’45 for the first national radio telecast on ABC, perhaps to trim a few seconds off the program. Over the next two weeks, I’ll watch all the nominees (except for the out-of-print HUMAN COMEDY), from immortal classics to forgotten curios. It’s an attempt to take the pulse of mainstream film-making of the era with fresh eyes. The list of nominees is after the break.

How to approach a film as ingrained in cultural memory as this one? By the time one arrives at a movie-going age, the film has been parodied, copied, and praised into oblivion. It’s impossible to watch free of the encrustations of its reputation, the “greatest” of this or that. But how did people see it upon its original release? I consulted my trusty James Agee and Manny Farber collections for some insight. Agee:

“Apparently Casablanca, which I must say I liked, is working up a rather serious reputation as a fine melodrama. Why? It is obviously an improvement on one of the world’s worst plays, but it is not such an improvement that that is not obvious.”

“Casablanca is still reverently spoken of as (1) fun, (2) a “real movie.” I still think it is the year’s clearest measure of how willingly, faute de mieux, people will deceive themselves.”

The “Casablanca” kind of hokum was good in its original context in other movies, but, lifted into “Casablanca” for the sake of its glitter and not incorporated into it, loses its meaning. Thus, Sydney Greenstreet’s velvet gesturing and suave cruelty were vitally necessary to “The Maltese Falcon,”…whereas in this picture he’s not even needed. He’s there merely for Sydney Greenstreet.

“Casablanca” is as ineffectual as a Collier’s short story, but with one thing and another – like Bergman, Veidt, and Humphrey Bogart – it is a pleasure of sorts.

I would recommend reading both reviews in full, but both are measured in their praise and engaging in some amiable push-back against its canonization. Agee’s short blurb goes after some of the clunky dialogue he “snickered at”, while Farber has a longer, in-depth consideration of its faults, while still praising its “political intelligence” and the performances of Bergman (“noble and utterly clear”) and Bogart’s mouth (“which seems to be holding back a mouthful of blood”).

Neither review uses much space on director Michael Curtiz, with Farber slamming his “incapable scissors” and Agee questioning his tracking shots with an esoterically phrased metaphor: “the camera should move for purposes other than those of a nautch-dancer.” “Nautch” is a style of Indian popular dance, so presumably he thinks Curtiz’s camera movements are too showy. I would disagree with both. After watching Warner Bros.’ dazzling new Blu-Ray, the cutting appeared precise and well-paced, while the tracking shots effectively map the various shady nooks of Rick’s Café Américain, where the parade of stellar character actors tilt up their heads.

The devious, doomed performances of this procession often transcend the flimsiness of their roles: Peter Lorre, Sydney Greenstreet, Marcel Dalio, Conrad Veidt, Claude Rains, Dooley Wilson, and S.Z. Sakall imbue their caricatures with flashes of mordant wit, frazzled humor, implicit violence, and a variety of other tones. But there are so many subplots and characters that everything feels rushed – “the picture has more acts than it knows what do with for truth and beauty”, says Farber, and I agree. It slows down for minor diversions (the young couple searching for a visa) while making short shrift of Lorre’s fastidious and fascinating black-market whiz. The political subtext chugs along (isolationist slowly convinced to fight) effectively, and the cumulative impact of so many expressive faces (Bogart and Bergman paramount among them), and Curtiz’s powerful use of close-ups, echo in the memory far longer than its overstuffed narrative.

This film needs no such equivocation. It’s a puffed up, hollowed out bore by any estimation, drained of any hint of politics or emotion. Agee and Farber both take healthy chunks out of its hide. Agee:

If you are not careful, you may easily get the impression that Gary Cooper is simply fighting for the Republican Party in a place where the New Deal has got particularly out of hand.

For Whom the Bell Tolls is a failure – perhaps Hollywood’s most exasperating refusal to fulfill any of its obligations.

Interestingly, both writers criticize the Technicolor photography as well, with Agee saying “it still gets fatally in the way of any serious imitation of reality”, and Farber seconding, “I myself find it difficult to take seriously a movie made in technicolor.” I would say this lack of “realism” has more to do with the exaggeratedly “arty” lighting scheme (lots of silhouettes, impossibly angled shadows) and the stodgy compositional sense Sam Wood brings to the table. Everything is group shots cut in to gigantic close-ups. It’s impossible to nail down the geography any given space, and the set-design is bloated, polished, and glaringly artificial. Farber rightly says the rebels’ cave looks more like a cafe. As with all technical innovations, the right artist had to come along to make critics get over Technicolor’s seemingly garish tones (Douglas Sirk, Vicente Minnelli, among others), as Hollywood hopes James Cameron has done with 3D.

My favorite movie of the bunch, and the one that used color “with sensitiveness and wit, I thought, for the first time.” So says Agee. He sees it as an echo of the great films of Lubitsch’s past (he idiosyncratically cites Forbidden Paradise and Three Women), but “not up to his best.” Farber writes a straight pan, attacking what he perceives as its “pictorial sterility” along with the censorship that de-fanged Don Ameche’s wolf in sheep’s clothing. These are two of Farber’s favored polemical points here, but his target is far more subtle than he’s giving credit for. In short – he’s completely wrong.

It’s true that Ameche plays a sensualist, and that none of his conquests are shown on-screen, but the film’s focus is on the uncertain adaptation of these impulses into married life, their attempted domestication into old age. Lubitsch’s short-hand of infidelities (a teenage hangover, a receipt for a bracelet), leave more room to examine the unintended consequences of his actions. The film is a warm, wise, and oft hilarious fable about the push-pull between love and lust, between aging bodies and raging libidos. It’s pulled off with a light touch under a cool palette of blues and grays (Gene Tierney’s dress, the hair at Ameche’s temples), creating a placid surface underneath which Lubitsch works his emotional magic. Ameche is effortless suavity, with a legitimate sparkle in his eye every time he spies Tierney, who exudes a world-weary charm. As they age together, spar together, and fade away together, Lubitsch has created one of the truest portraits of marriage I’ve seen on-screen. It’s a patient, funny, and inordinately wise. Add a blustery Charles Coburn and you get a masterpiece.

Out of print, aside from $80 VHS tapes on e-bay. I haven’t seen it, so my words are from TCMDB: “A small-town telegraph boy deals with the strains of growing up during World War II.”

Agee: “The picture is mainly a mess, but as a mixture of typical with atypical failure, and in its rare successes, it interests me more than any other film I have seen for a good while.”

Farber: “If you tried to imagine the most gruesome result of a collaboration between William Saroyan and MGM, to both of whom life tends to be a chocolate soda made out of words, you couldn’t have approached the disaster of ‘The Human Comedy.’

IN WHICH WE SERVE (1942), directed by Noel Coward and David Lean

A stirringly effective, and surprisingly downbeat, WWII propaganda film from Noel Coward, it presents a cross-section of British society as seen through the eyes of the crew of a bombed British destroyer. The HMS Torrin is sunk at the Battle of Crete, and as the sailors hang on a lifeboat, a series of flashbacks detail their lives immediately preceding their deployment. It’s an elegant structure that packs a lot of story information in a compressed time frame, ratcheting up tension while presenting thumbnail sketches of the survivors at once. Coward plays the Captain with stone-faced dignity, and the rest of the cast underplays with equal aplomb. Celia Johnson is his long-suffering wife, eyes welling up with tears as she sends him off on yet another tanker, while his crew gets married, argues with mother, and dreams of the future.

It was one of Agee’s best films of 1942 (it opened late in ’42, not made eligible until ’43 for the awards), and Farber was also a huge fan: “There is unusual respect for the ordinariness of people’s behavior; so that they come out stronger, more admirable for being natural.”

Unlike with Heaven Can Wait, in The Ox-Bow Incident Farber finds a Hollywood film untainted by censorship. It had its say “without losing a scene, a character or a line of dialogue to the Hays Office, the studio or the box office.” For him, this makes it an unqualified triumph, and a “thrilling experience.” This seems to be the critical consensus of the period, as Agee agrees that it was “remarkably controlled and intelligent”, although he felt that it contained a “stiff over-consciousness” that drained the film of “its own warmth and energy.” In any case, it is clearly one of the most important films of the year.

This morality play, about the lynching of three men at The Oxbow, Nevada, in 1885, is surprisingly dark as well as overtly “arty” in its intent. The main stage is an expressionist tinged clearing with a gnarled tree at its center and studio-artificial scrub brush surrounding it. Three men are caught and accused of murder, with a string of circumstantial evidence tying them to the crime. A group of locals band together for a lynching – led by a tyrannical Confederate soldier and a bloodthirsty Jane Darwell (otherwise known as Ma Joad). The liberal faction attempts to stall the slaughter and fails.

Shot by Wellman and cinematographer Arthur Miller in a spare, heavily shadowed, overtly symbolic style that he would push to delirious lengths in the great Track of the Cat, it’s a triumph of mood. The shadows distort the lynchers’ faces into rictuses of fear and terror, as if out of a Kirchner or Munch painting. It is a self-conscious work of art, almost stilted in its artificiality, but the quality of the craftsmanship is high, and Henry Fonda’s wounded gait has carried lesser films.

Next week I’ll take a look at the rest of the nominees:

THE MORE THE MERRIER (1943), directed by George Stevens

THE SONG OF BERNADETTE (1943), directed by Henry King

WATCH ON THE RHINE (1943), directed by Herman Shumlin