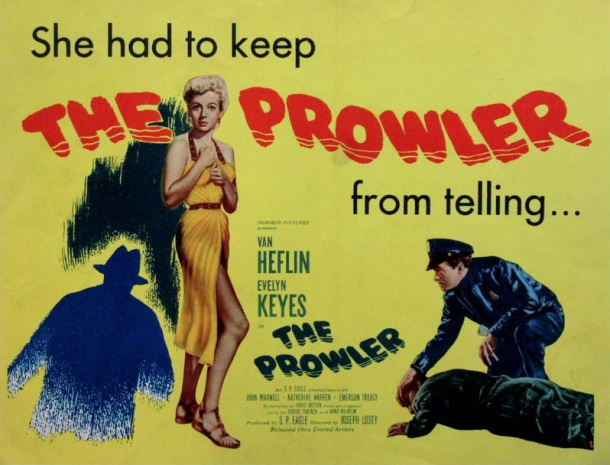 The Prowler was made by disillusioned men. Director Joseph Losey, screenwriter Dalton Trumbo, and visual consultant John Hubley were all eventually blacklisted by the House Un-American Activities Committee. Trumbo was already tarred, so his writing credit was given solely to Hugo Butler – while Losey and Hubley were pushed out of Hollywood soon afterward (Losey made one more film, The Big Night, before moving to Europe, while Hubley turned to uncredited work in commercials). Every major American institution is treated with a disdainful eye in The Prowler, a despairing document reflecting the state of the political Left in 1951, making it one of the bleakest film noirs ever made. James Naremore quotes Losey in describing the Hollywood liberal that year:

The Left in Hollywood was utterly demoralized by Truman, the atomic bomb, and the HUAC investigations, and it was beginning to recognize “the complete unreality of the American dream”.

The protagonists of this sleazy little drama are Webb Gardner (Van Heflin), an oafish cop fueled by class resentment, and Susan Gilvray (Evelyn Keyes), a plasticine blonde bored with her milquetoast husband. Or, as Manny Farber described them, “an amoral rookie cop” and a “hot, dumb, average American babe.” Either way, they were born to torment each other. In the opening shot, Susan stares off camera, shrieks, and pulls down the shades. There’s a prowler outside, and we’re out there with him. After this self-reflexive jape, literally putting us in the shoes of a voyeur and jokingly incriminating the whole movie-going enterprise, Losey pulls back to the larger narrative.

Susan calls the police to investigate the prowler, and Webb arrives along with his folksy, contented middle-class partner, Bud (John Maxwell). Sweeping the grounds outside, Webb circles around to the window in her bathroom. In a reversal of the opening shot, the camera is placed inside the window looking out, and Van Heflin takes our offending place where the peeper was first spotted. It establishes his perversity – he’s got a smarmy grin on his face – and re-enforces the possibility of ours. It’s the first of many shots where Webb is shown in transitional spaces – doorways, hallways and windows. The problem is that he always gets closer.

When he returns later that evening, she allows him in her living room, which the script described as “comfortably and tastefully furnished in Barker Brothers’ more expensive style of four years ago. There are overstuffed chairs and a couch; two bad landscapes on the wall” (quoted in “Un-American” Hollywood by Frank Krutnik).

Susan lives in one of the knockoff Spanish Haciendas favored by the upper middle classes in L.A. following WWII. The design is bland, second-hand, and forgettable. In a sly bit of set design, Diego Rivera’s The Flower Carrier [left] hangs over her dining room table, an artwork depicting labor exploitation tamed and turned by middle class apathy into mute wallpaper. Krutnik weaves a whole interpretation around the placement of the painting, which is available to read in his book’s Google preview.

This is the life Webb had been seeking, a life of quiet contentment in a “tastefully furnished” apartment, with a well-dressed blonde at his side. Over coffee, his class resentments come pouring out. He mews that being a cop is no better than a ditch-digger, money being his only bottom line. Susan ignites his jealousies further by revealing how she grew up in Indiana, in the same town as Webb, only she came from a wealthier family on a well-tended street.

It is this revelation that turns Susan into a prize – the ivory tower hidden from him because of his station in life. He becomes aggressive, animal, relentless. Susan resists meekly, than gives herself over entirely. Her own American dream, of raising a family, foundered in her husband’s infertile loins. Reduced to the life of a cloistered housewife, Webb’s meaty pawing feels like freedom. The husband only lives as a voice on the radio, as he’s the host of a popular nighttime music show, and an unwelcome presence during Webb’s ungainly seductions. In a small note of resistance, Losey cast Trumbo as the husband’s voice, his nasal tenor a ghostly presence even before his body gets knocked off in the Double Indemnity– inspired plot.

The Prowler spreads its sarcasm over the entire roll-call of American myths. Marriage, small-town life, the police force, and even capitalism itself are shown as empty, repressive forces. Susan and Webb are driven to each other, and then self-desctruct, all because of their unrequited love of the American dream. They want a perfect middle-class life, and Webb is more than ready to kill for it.

Van Heflin and Evelyn Keyes provide two sterling performances of American indolence and greed. Heflin is especially mesmerizing, his wide-set eyes, gangly limbs, and lasciviously parted lips looking like a grotesque caricature of masculinity. His arms and legs seem to flail out of sequence when he stalks around Susan’s home like an uncaged gorilla, and his apartment is a bubbling cauldron of 50s macho-ness. There’s a target practice sheet on the wall, muscle mags on the desk, and an electronic razor incessantly buzzing around his reddened mug. Then when Susan calls seeking reconciliation for one of their flaps, he strokes the phone’s receiver around the edge of his mouth, his eyes burning with a look of sexual ecstasy. It becomes clear later that he’s been planning a murder. Evelyn Keyes has less to work with. Andrew Sarris describes the dilemma of the actress in a Losey film (thanks to Glenn Kenny for pointing me to this quote in his blog post on The Prowler):

The feminine role in Losey’s world is strictly subordinate because of the histrionic hysteria of his actors. Men simply cannot cope with their lives and social institutions, and they crack up with very lyrical results. Meanwhile the women stand by to pick up the pieces. They cope because of their ability to compromise with reality, an ability Losey frankly admires. Unfortunately, the best roles are the least stable. Hence, Losey’s actresses are usually denied the great scene-stealing moments of psychic dissolution.

This is all true for The Prowler, with Keyes having to swing between lassitude and disconsolate passion – no emotional match for Heflin’s demoniac dissembler. But in her own minor key, she is superb. In her cool apathetic demeanor she delivers lines with a lack of affect, as if her personality had been worn down over time. Her personal desires have been co-opted by those of her society, hence her bizarre decision to hook up with Webb and start a family on the edges of the world they so desperately wish to enter.

By the end they are pushed out of the middle-class suburbs and literally start to disappear. They are forced to go to a ghost town abandoned after a gold rush, where they enact a grim parody of the social roles of husband and wife – she does the dishes, he gets the food – and there’s a baby on the way. This section of the film is heightened both visually and narratively, as the events become more overtly symbolic and hallucinatory. The “door” to their room is a sheet that is beaten down by a raging storm. Webb has no other boundaries to cross, and now he simply wants the world to stay away. But the wind and rain keep busting in, and a simple country doctor brings their whole pathetic existence to a close – climaxing on a long climb up a short hill.