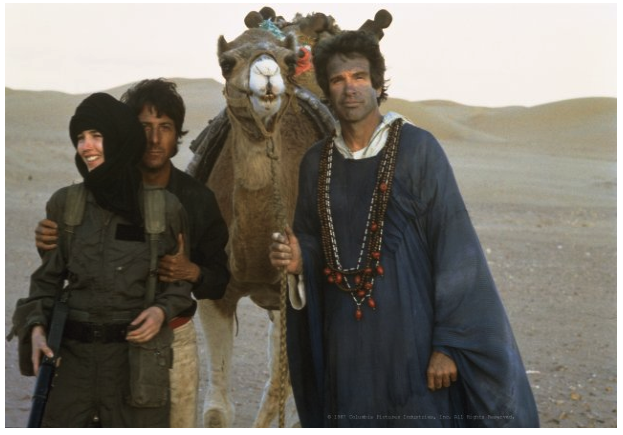 It is hard to separate a film from its context. This becomes especially clear with Ishtar (1987), Elaine May’s notorious flop that is known more as a punchline than a movie. Last week, 92nd Street Y in NYC screened the “Director’s Cut” of Ishtar,  followed by a rare discussion with May (a Blu-ray of the film was announced, then delayed, by Sony, but hopefully this cut will see release by year’s end). This is the first time I have seen the film, and cannot say what differences appear in this cut.

In a much needed reversal, May was delivering the punchlines while Ishtar the movie was talked about more than its account books. The coverage before its initial release fixated on its $55 million budget, with the Los Angeles Times repeatedly referring to it as “Warrensgate”, imputing both Watergate criminality and Heaven’s Gate excess to its cost overruns. An epic New York Magazine profile from March 16, 1987, reports on the doomed casting of a camel, and that May shot 50 takes of one scene, “with three cameras rolling at all times”. And this was from a writer seemingly sympathetic to the project. Ishtar was eclipsed by its own production history before it hit screens.

Watching it outside of the media maelstrom, it seems a natural extension of May’s other films, a nimble comedy about the thin line between attraction and revulsion in friendships and love affairs. Intense identification inevitably boomerangs into pity and contempt in May’s universe, with her performers utilizing a fidgety physicality to wriggle uncomfortably under their admirer’s gaze. In A New Leaf, Walter Matthau’s fastidious aristocrat plans to murder his wife (played by May) as she praises him for instilling her with a new found confidence. The purer her intentions, the more vicious Matthau gets, his smooth patter reduced to sputtering rage. In The Heartbreak Kid, Cybil Shepherd treats Charles Grodin’s obsession initially as a flattering lark, and then as a perplexing challenge. Her early, brittle laughter at his clumsy advances changes to a look of beatific confusion as Grodin refuses to give up the chase. Mikey and Nicky might be the purest distillation of this push-pull rendered in gestural uncertainty, as Peter Falk and John Cassavetes weigh friendship against self-preservation.

Ishtar places the central friendship on a grander scale, in the middle of a Cold War Hope-Crosby movie crawling with counter-intelligence officers. Dustin Hoffman and producer Warren Beatty star as the impossibly awful songwriting duo of Clarke & Rogers, who are shocked when, “That A Lawnmower Can Do All That” and “Wardrobe of Love” don’t lead to fame and fortune. So they take a gig at a nightclub in Morocco to live out the string of their dream. They are swiftly enmeshed in spy games, however, as Hoffman is drafted by Charles Grodin’s CIA agent, while Beatty is charmed by an attractive revolutionary (Isabell Adjani). Inadvertently acquiring a map that could inflame tensions in the neighboring country of Ishtar, they are chased, cajoled and seduced by secret agents from all over the world. It’s all showbiz to Clarke & Rogers, who work the levers of justice to release their art to the world.

May and cinematographer Vittorio Storaro reportedly clashed on the set, with Peter Biskind writing that, “Storaro was designing shots with an eye to their composition, their beauty, whereas she was composing for comic effect.” Whatever their professional relationship was like, it produced a comedy of rare visual logic. Early on, Warren Beatty is shot recessed into the frame, most notably in a bar where Hoffman tells him he wants to be alone. So Beatty sits at the far back right corner, with Hoffman in the left foreground. Instead of cutting in to Beatty sitting alone for a cheap reaction laugh, May and Storaro keep it in long shot, emphasizing Beatty’s absurd isolation from Hoffman, and setting up their long-distance conversation punchline. This shot encapsulates the Clarke & Rogers team, with Hoffman’s Clarke striving for a kind of hipster depressive cool while Beatty’s Rogers is dopey and supportive, although more honest about his secondary role in life – a background singer comfortable in his own clumsy skin.

Hoffman conveys his contradictory love and disdain for his puppy-dog pal throughout with self-lacerating self-loathing. Clarke clearly hates himself, dolling himself up in Boss bandanas and ska skinny ties, he’s a man without a personality, and attempts suicide early on. He desperately needs and intensely pities and loathes Roger’s affection, a dichotomy that plays out when they are pinned against each other in the Cold war intrigues.

Early on, Beatty seems to be laboring over his Stan Laurel-esque dope, underlining every inanity with a too broad smile not aided by the cartoonish wardrobe of floppy hats and kitschy sweaters. But as the film rolls on he eases into a rhythm, underplaying the punchlines like a pro. His obliviousness as a blind camel knocks down passersby is an uproarious scene aided by his deft obtuseness. In the discussion, May compared the two performances to the rejected contestants on American Idol, noting “how touching they are” in their unbowed belief in their non-existent skill. She also compared them to Ronald Reagan, whom she had met previously. He was a big fan of her act with Mike Nichols, and could recite their “Telephone” sketch from memory. She said he was “an amazingly naive, charming guy, who really cared about show business”, clearly a model she used for both leads.

May was in fine form, as if she had been workshopping her material in clubs the previous week. Received to extended applause, she deadpanned, “Either you like the movie or I’m very sick.” Referring to herself as a “nightclub comedian”, she ran through the Ishtar scrum with a residue of anger, venting at then-Columbia president David Puttnam for releasing the budget figures and publicly attacking Hoffman and Beatty. Essentially, she said, “the entire studio committed suicide”, and Coca-Cola sold Columbia to Sony in 1989, soon after the debacle. But the main focus was on her work, and the instinctually humble May was clearly uncomfortable at all the hosannas floating her way. When asked if Ishtar was ahead of its time, she quipped, “No, that’s impossible. Even with string theory.”