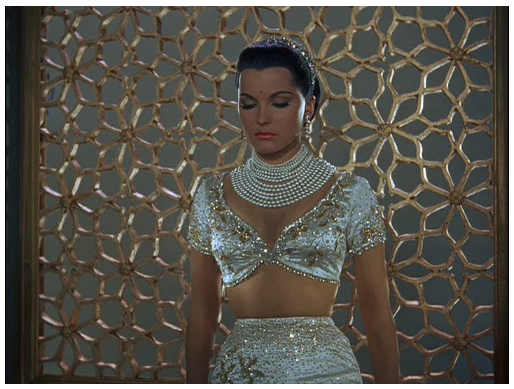 In a bit of home video serendipity, the films Fritz Lang made in Hollywood and Germany from 1956 – 1959 were all recently released on DVD. The Warner Archive put out re-mastered versions of his last two Hollywood films While the City Sleeps (1956) and Beyond a Reasonable Doubt (1956), while the UK Masters of Cinema label produced a luminous edition of his two-part Indian epic, The Tiger of Eschnapur (1959) and The Indian Tomb (1959). All four films snare their main characters in webs of malevolent fate. The first two pin their characters inside geometrically arranged compositions, granted the illusion of motion in a world constantly boxing them in. This is garishly illustrated in the Indian Epic, as seen above, with elaborate imagery of imprisonment emerging from the set design. They use strikingly different methods to pursue similar ideas of fate and desire, from threadbare pulp to embroidered imperialist myth.

After the financial failure of the astonishing Moonfleet (1954), which had his highest Hollywood budget at $1.9 million,  Lang was finding it difficult to attract studios’ attention. So when producer Bert Friedlob offered him a modest two-picture deal with distribution through RKO, he accepted. The two titles were prepared simultaneously, according to Lang biographer Patrick McGilligan, and the director split his time between the screenplays – working with Casey Robinson on While the City Sleeps and Douglas Morrow on Beyond a Reasonable Doubt. Both were shot in SuperScope, and the Warner Archive is releasing them in a 2:1 aspect ratio, which looks just about right to me.

Both plots contain what Tom Gunning called “a double goal, in which the main action the characters undertake is given a double motivation by an authority figure.” For While the City Sleeps, the main plot follows a serial killer, in which the sexually repressed mama’s boy Robert Manners (John Drew Barrymore) is tracked down by the investigative reporter Edward Mobley (Dana Andrews). The double goal is given by the petty new newspaper owner Walter Kyne (Vincent Price), who dangles a new executive manager position to whomever can crack the case. The reporters’ betrayals and insane drive to scoop the story often overshadow the killer plot, and seem almost more inhuman.

In Beyond a Reasonable Doubt, the Dana Andrews character Tom Garrett is on trial for murder. The shadow story is that his former news editor Austin Spencer hatched a plan to manufacture circumstantial evidence for the trail, in order to get a conviction. Once convicted, Spencer would reveal the ruse, proving that innocent people could be condemned to death without a smoking gun.  As Gunning writes, in his indispensable study The Films of Fritz Lang, “in both cases suspenseful stories of crime and punishment are framed within journalistic investigations.” Both films interrogate their own premises through these creator figures that, like Lang, initiate stories they soon discover they don’t have control of.

Walter Kyne, played with an oily buffoonery by Vincent Price, inherits the company after his father’s untimely demise. Clearly a pampered, narcisstic creature, he promptly chooses to use the newspaper as his own private penny dreadful theater, siccing the reporters against each other in his perverted “contest”. Lang sets out the space of the office as entirely open and visible – everyone can see each other’s performances at all times. In an early sequence the manager of the wire service, Mark Loving (George Sanders) is seen whispering into his secretary’s ear. They are framed in a glass window as if on television, and Mobley is watching them from across the room. He calls her to break it up. Everyone is the center of their own panopticon, everyone in the office having the all-seeing powers of a previous Lang mastermind like Dr. Mabuse.

As the reporters race around to save their future inside these all-public spaces, the killer Manners still stalks the streets. Mobley lures him into town with a baiting television broadcast – the televisual as another kind of all-seeing eye boring into even the psycho’s shabby apartment. Let out into the open, Manners stalks Mobley, and stumbles into another space of hyper-visibility, the bar down the street. Stumbling downstairs, he finds the ace investigative reporter and TV personality canoodling with the woman’s advice columnist Mildred Donner (Ida Lupino). Even the killer cannot escape this public theater that Kyne has introduced.

Beyond a Reasonable Doubt flattens the theatrical world of While the City Sleeps into strips of men standing next to walls. Where there was depth in the newspaper office, here there is nothing but static two and three-shots, everything pushed close to the foreground of the frame. It is so pared down it amounts to the characters simply standing and telling the story to the camera, as in the modernist distancing of Manoel de Oliveira’s Francisca, in which his characters stare at the camera and read the dialogue from Agustina Bessa-Luís’s 1979 novel Fanny Owen. Jacques Rivette saw something similar in his review of the film for Cahiers du Cinema in 1957:

The first point that strikes the unsuspecting spectator, a few minutes into the film, is the diagrammatic, or rather expository aspect instantly assumed by the unfolding of the images: as though what we were watching were less the mise en scene of a script than simply the reading of the script, presented to us just as it is, without embellishment.

[…] No concession is made here to the everyday, to detail: no remarks about the weather, the cut of a dress, the graciousness of a gesture; if one does become aware of a brand of make-up, it is for purposes of plot. We are plunged into a world of necessity…

This world of necessity was partly brought about by the low budgets Lang was working with, but he turned that to his thematic advantage, the spartan set decoration and limited set-ups illustrating the mechanics of the crime thriller itself. The editor and writer are shown planting evidence and documenting the planting of this evidence, authoring their own crime movie in the middle of a crime movie. Eventually they get caught in the machinery of their construction, and the brutal ending shows a man lost inside of his own story.

Where Beyond a Reasonable Doubt is spartan, the “Indian Epic” is overstuffed, a lavish spectacle that is beloved (and screened) at the same level as It’s a Wonderful Life in Germany, according to this article in Rouge (Lang’s is the third version of the film. He was slated to direct the first version in 1921, scripted by his future beau Thea Von Harbou, but producer Joe May took the reins instead to great success. Tom Gunning has written an exemplary essay that includes all this and more in the Masters of Cinema set). A German architect named Harald Berger (Paul Hubschmid) is contracted to expand the made-up fortress city of Eschnapur in India. He soon falls in love with the religious dancer Seetha (Debra Paget), whom the Crown Prince Chandra (Walter Reyer) is madly in lust with. This love triangle pulsates for over three hours in various permutations of escape and capture.

As a representation of India, the movies are ridiculous, a hodgepodge of sparkly costumes and wild misrepresentations of religious ceremonies. But as a lesson in how visual style can convey inner tensions, it’s rather wonderful. It begins in the set design of Willy Schatz, who helped create the never-ending web imagery that will snare every character in turn. In one telling sequence, Seetha has been corralled by the Prince into one of his chambers. She is kneeling in front of a gold cage, the imagery more than obvious. But the next cut is to the Prince leering through one of the web-like grates in the wall, looking more imprisoned than Seetha, who is situated outside the cage. But the Prince is tied by heredity to this intricately designed fortress-mansion, and is doomed to love a woman who will never love him back.

These set patterns weave their way throughout the film, with geometric shapes filling the space behind the Prince’s head during Berger’s arrival, a real cobweb that hides a fleeing Berger and Seetha, and the high-angle shots which turn regular courtyards into clashes of giant rectangles. The fortress contains prisons within prisons, until Berger is stashed below the surface of the mansion, in a deep well in a network of catacombs located beneath the mansion. The space envelops everybody, rendering them mute and impotent against their implacable fate. The happy ending involves another escape, but since the film is based on a cyclical rhythm of freedom and capture, perhaps Lang just elided their eventual return to this venus fly trap of cities, which wraps the characters in its vise-grip jaws, never letting them go.