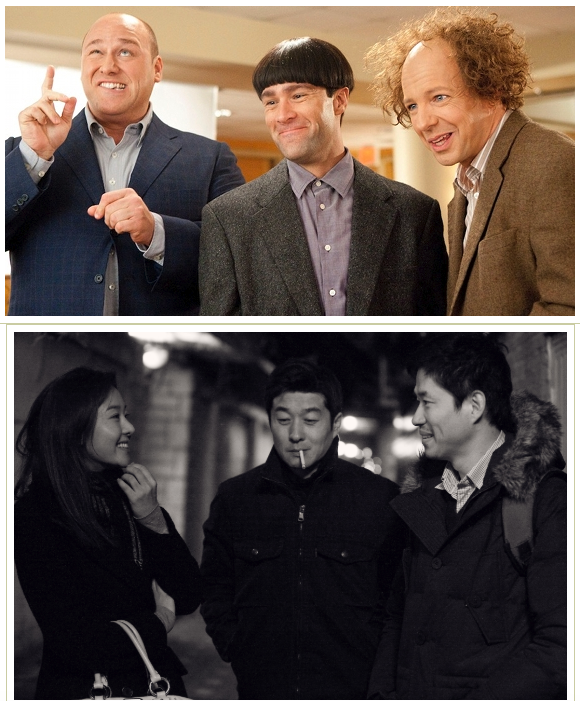 The mind needs structure. So when watching films in quick succession, unexpected linkages emerge, like the strange thematic similarities between Hong Sang-soo’s The Day He Arrives (in theaters now from Cinema Guild) and The Farrelly Brothers’ version of The Three Stooges, discovered while watching them back-to-back over the weekend. The first is a critically-acclaimed art film in limited release, the second the lowest of lowbrow comedies out everywhere, and yet they are both  episodic narratives about arrested male development, albeit in different stylistic registers. The Day He Arrives uses a teasingly complex script to lay out the alternate life paths its passive protagonist could have taken, hypnotically acted out with repetitive gestures and phrases. The Three Stooges, however, are active participants in their own destruction, eager to endlessly pratfall down the same road to get the eternally recurring nyuk-nyuk inducing result. Two versions of male stupidity, touchingly rendered.

The Day He Arrives is the latest generator of masculine regret from Hong Sang-soo, who has been mastering his elegiac deadpan mode since ’96, with increasingly fractured narratives. This one circles around ex-film director Seongjun (Yu Junsang), who leaves his exile in the country to visit his college friend Youngho (Kim Sang-joong) in Seoul. He says, “I’m not going to meet anyone but him”, which of course means that everyone on the street is a former lover or fan, forcing him to relive all the fumbling mistakes of his past. As Seongjun walks in circles, in a predetermined grid set up by the opening shot of an intersection, his past life starts repeating in the present. A rekindled relationship with an old flame from school is then re-enacted almost word for word with the owner of a bar named “Novel”. Seongjun learns nothing new, though,  keeping his distanced, faux-romantic pose as he once again cuts off personal contacts and retreats into his shell. Though he idly hopes that his films will be “re-evaluated after enough time has passed”, he never deigns to re-evaluate himself. It’s a bumbling, tragi-comic vision of Nietzsche’s eternal return:

“What, if some day or night a demon were to steal after you into your loneliest loneliness and say to you: ‘This life as you now live it and have lived it, you will have to live once more and innumerable times more’ … Would you not throw yourself down and gnash your teeth and curse the demon who spoke thus? Or have you once experienced a tremendous moment when you would have answered him: ‘You are a god and never have I heard anything more divine.’ -Nietzsche, The Gay Science

Seongjun is too oblivious to be aware of his endless circling , his flickering consciousness too self-absorbed  and far too passive to gnash teeth. Maybe he would make do with a clench, if it didn’t strain him too much.

The Three Stooges are also stuck in an eternal return, not just of the endless recycling of television characters, but of their insatiable need to beat the snot out of each other, a trio of sadomasochistic co-dependents. Seongjun burrows inside himself to escape the world, while the Stooges slap each other to do the same. The Farrelly Brothers have examined all kinds of physical and psychological maladies (Seongjun is heading in the direction of Jim Carrey’s severely repressed schizo in Me, Myself and Irene), but the Stooges are the most sociopathic characters in their careers. A stupider and more violent Dumb and Dumber, which means, yes, it is a stirring return to form.

The Farrellys  give the reborn Stooges an origin story, as babies dumped at an orphanage at the feet of the curmudgeonly Sister Mary-Mengele (a hilariously harrumphing Larry David). As amateur hell-raisers they are never chosen for adoption, and are spurred to action when the nuns are forced to sell the place unless they raise six figures in cash.

The trio of low-watt celebrities do a remarkably good job at capturing the staccato tempo of the original Stooges. Sean Hayes has a fine falsetto whine as Larry, Chris Diamantopoulos has the nasal a-hole Moe voice down pat, and Will Sasso does a nimble Curly, always the most balletic Stooge. Avoiding the baggage of the originally rumored stars (Carrey, Sean Penn and Benicio del Toro were all attached at one point), these anonymous performers are able to put the jokes center stage.

Sent off into the world, the Stooges are as helpless as Seongjun, although instead of re-living past failures they establish new ones, including starting up a free-range salmon farm that flops. They attempt to insulate themselves from the world through their friendship (as the conjoined-twin protags of Stuck on You do), but start to crack apart instead. They re-team because they have to, due to the demands of Hollywood narrative as well as their own natures – they eye-poke, therefore they are.

If posed with Nietzsche’s question, they would probably answer “never have I heard anything more divine”, fools in love with their own foolishness, and when peeking outside the edges of their slap-happy triumvirate, would eagerly agree to stay inside of it for eternity, free to create chaos and baby pee fights wherever they may roam. Seongjun, an alcoholic Bartleby, would rather not participate in life. His Cartesian saying would be: “I think, therefore I want to disappear.”