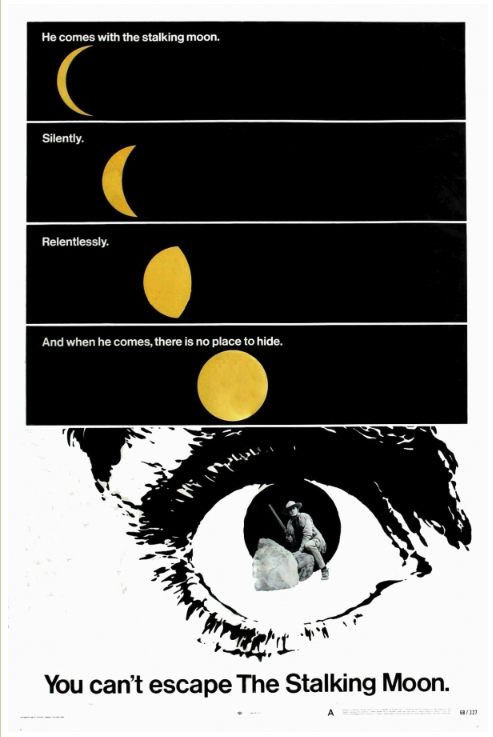 This is Part Two of a four-part series that looks at the career of director Robert Mulligan. You can find Part One here.

After the success of To Kill a Mockingbird, Robert Mulligan and producer Alan Pakula made five straight films together to close out the 1960s, before Pakula departed to become a director himself. Using Mockingbird as a template, the duo chose projects that dealt with hot button issues (Love With the Proper Stranger and Up the Down Staircase), or were prestigious literary adaptations (Baby the Rain Must Fall and Inside Daisy Clover). Their final collaboration, The Stalking Moon, with a story taken from a Western novel, is the exception. Regardless of their middlebrow origin, these are films sensitively attuned to the social and geographic landscapes of their subjects, to the ebb and flow of urban overcrowding and the oppressive emptiness of the open plains. These films also continue Mulligan’s interest in outsiders adapting to new realities, in “dramas of experience intruding upon innocence”, as Kent Jones eloquently put it.

Love With the Proper Stranger was filmed in March, 1963, just as To Kill a Mockingbird was opening nationwide, and was released that December by Paramount. The original script by Arthur Schulman is a downscale romantic comedy, about two struggling New Yorkers, one the out-of-work musician Rocky Papasano (Steve McQueen), the other Macy’s cashier Angie Rossini (Natalie Wood), who are thrown into a relationship after a one-night stand. Angie is pregnant and confronts Rocky, but only wants him to help pay for her abortion.

The musician role was originally offered to Paul Newman, but he turned it down to play the title role in Martin Ritt’s Hud. McQueen doesn’t look the part (he’s more Celtic than Italian-American), but his impassive, slightly hunched interpretation of his character’s protective cynicism is effective and affecting. He walks uncertainly, as if he depended on the city’s walls to hold him upright.

The movie came out a year after Helen Gurley Brown’s Sex and the Single Girl was published (and was filmed a month after The Feminine Mystique came out), and the film channels some tenets of this embryonic feminist text. Angie, when she learns she is pregnant, initially decides to get an abortion, and repeatedly refuses Rocky’s request to get married. Above all else, she wants to live on her own and have financial independence, one of Gurley Brown’s main tenets. Natalie Wood plays Angie with a childish impudence, her stand on women’s rights emerging out of foot-stamping temper tantrums. As the film progresses, and the power roles shift, Wood is able to direct McQueen’s actions with the power of her gaze.

Mulligan has Rocky and Angie continually navigate densely populated spaces (most of which were shot handheld, on location in NYC), going with and against the flow of crowds. In the opening, in which the musicians’ union hall is shown slowly filling to capacity, Angie has to squeeze through to track down Rocky, who doesn’t even remember her. Angie’s apartment is a jungle of mattresses, loud-mouthed brothers and spiteful mothers. Rocky is only seen in his mistress’ place, filled with a half-dozen dogs and cardboard cut-outs of her burlesque act. The world only empties out when they head to the Meatpacking district and meet the black-market abortionist on an abandoned street corner. The world subsides, and decisions must finally be made.

Mulligan re-teamed with McQueen for Baby the Rain Must Fall (1965), a Southern melodrama made for Columbia Pictures about a Texas rockabilly singer and his relationship with his estranged wife. Horton Foote, who wrote the To Kill a Mockingbird screenplay, adapted his own 1954 play, The Traveling Lady for the screen version. The film follows Georgette (Lee Remick) and her daughter as they travel to the small town of Columbus, TX, to see her husband Henry (McQueen), recently released from jail. He is a talented singer-songwriter and a dedicated drunk, unable to resist the lure of the juke joints. An orphan, Henry was raised by the dictatorial Miss Kate (Georgia Simmons), who beat and belittled him as a child. Henry has to overcome his personal and family demons to have any chance at a decent life.

Shot in B&W by veteran Ernest Laszlo (Kiss Me Deadly), the look is the drab grays and hard-edged realism of WPA photographers like Dorothea Lange, while Mulligan opts for contrasts of wide landscapes and looming close-ups. Henry and Kate are connected in the opening bus ride by match cuts on their faces looking off-screen, and their relationship is closed by looking away from each other in the final shot.

The visuals are reliably elegant, but the story is a bit overwrought, with the deeply felt story of Henry and Georgette’s relationship getting overshadowed by the bizarre Southern Gothic subplot of Miss Kate, whose arch-villainy provides a too-pat explanation for Henry’s self-destructive behavior. It’s better to shut your ears and just watch Mulligan and Laszlo go to work.

Mulligan and Pakula went to Warner Brothers for their largest project to date on Inside Daisy Clover, which Natalie Wood was eager to make. Wood had known author Gavin Lambert because of his association with Nicholas Ray, who had directed her in Rebel Without a Cause (1955). Lambert was a young film critic for the British magazine Sequence who later became Ray’s assistant and co-screenwriter on Bitter Victory (1957). Wood contacted him to adapt his own book, and the project started up.

Wood had a personal interest in the satirical tale of Daisy Clover, the young girl plucked from obscurity and groomed into a major studio star, a trajectory largely similar to Wood’s, who gained fame as a little girl in Miracle on 34th St.(1947). The story tracks Clover’s ascent from a celebrity photo stand in Angel Beach, CA, to the heights of Hollywood glory. Along the way she loses her mother and any sense of personal identity. Molded by Swan Studios head Raymond Swan (a deliciously supercilious Christopher Plummer), she becomes a sexless child-star into her late teens, a Mary Pickford of the ‘30s (when the film is set).

It was an odd project for Mulligan to take on, a campy, deeply ironic text put in the hands of an earnest, old-school dramatist. If directed by someone as gifted at caricature and exaggeration as George Axelrod, it would undoubtedly be funnier and more ruthless, however Mulligan does elicit fine performances from Wood, Robert Redford and Ruth Gordon (who received a Best Supporting Actress nomination as Daisy’s ditzy mother). Wood’s transition from smart-aleck street urchin to trembling neurotic is pitched at the same manic level, as if Daisy were hoping that if she kept moving she would never collapse. Redford’s Wade Lewis is the dashing leading man who marries Daisy and breaks her heart. Lewis was originally written as homosexual, although Redford didn’t want to play it that way:

“I wanted to play him as a guy who bats ten ways – men, women, children, dogs, cats, anything – anything that salves his ego. Total narcissism.”

He is Valentino-suave, a nimble seducer who can back men and women willingly into any corner. It is a impressively eroticizied performance for the young Redford, who was singled out for positive notices in the generally hostile reviews. It was also one of the few depictions of a homosexual, or bisexual, character in the 1960s that was not killed in the last reel (as Vito Russo writes in The Celluloid Closet).

Manny Farber described the film as a “thoroughly soft Hollywood self-satire”, but rightly points out the tragic heart of the film, the scene in which Daisy breaks down during a dubbing session. “One scene that is dynamite as anti-Hollywood criticism and the only scene in which Natalie Wood, snapping her fingers to get in time with a giant screen image of herself, is inside the Daisy role with the nervous, corruptible, teenage talent discovered years ago by Nick Ray.” With her image duplicated up on-screen, Daisy repeatedly tries to fill that screen icon’s mouth with her own words, but she can’t do it. The image up there no-longer represents the woman in the booth, and she breaks down, the first step in breaking free.

Inside Daisy Clover was Mulligan-Pakula’s first big failure at the box-office, so they retrenched with a smaller-scale movie, again at Warner Brothers. The two Bronx boys returned with a small high-school drama set in East Harlem, Up the Down Staircase. It was based on the novel by Bel Kaufman, and adapted for the movie by Tad Mosel. It was filmed in Benjamin Franklin High School (now the Manhattan Center for Science and Mathematics), and uses what looks like real students as extras.

In a return to the style of Love With the Proper Stranger, Mulligan uses a lot of mobile handheld cameras to get right into the chaotic flow of teenagers rampaging through hallways. He follows Sandy Dennis through the chaos, playing a teacher straight out of grad school and thrown into the English department. The movie, which opens in the morning herd, is all about organizing the herd into an efficient shape. The routine of the school is expertly plotted by Mulligan and his DP Joseph Coffee, looping in and around the main office as Dennis picks up the endless paperwork and adapts to the quick, repetitive rhythms of a NYC bureaucracy. Mulligan rarely slows down the speed, but when he does, it’s a stunner. He singles out one of Dennis’ students, Alice, for a particular investigation.

As in Proper Stranger’s Meatpacking District, the world empties out, and Alice wanders the hallways with a love letter in her hand. Keeping a respectful distance behind her, Mulligan follows her progress into the office as she drops it off, exits to the middle of the school, hesitates, and returns. She is aghast to see the “unpublished writer, and therefore dangerous” Paul Barringer (Patrick Bedford) holding her letter in his hand, with a smug smile on his face. This simple scene has psychological ramifications that radiate throughout the rest of the film. It is a sequence that tracks Alice’s movements as well as her thoughts, the hesitation revealing the worlds of emotion weighted beneath her surface.

The idea of “moving-as-thinking” is key to The Stalking Moon (1968), a spare Western with no social significance or literary pedigree (it was based on a book by Theodore V. Olsen). For their final collaboration, Mulligan and Pakula make a film that is simply pure cinema, a chase between reluctant hero Gregory Peck and the vengeful, displaced Salvaje (Nathaniel Narcisco). In 1881, Peck is working his last day as an Army Scout, but finds an American, played by Eva Marie Saint, who had been a captive of the Apaches for 10 years. Peck, after much harrumphing, agrees to help Saint and her child travel to Columbus, OH. When he discovers that the legendary Apache warrior Salvaje is the child’s father, he invites them to stay at his cabin, and protect them the best he can. It is an extended chase film, in which one side (Salvaje), is barely seen. The perspective is restricted to Peck, whose looks and hesitations express more than the minimal dialogue he is given.

There is a moment in the cabin, in the low-light of the room shot by DP Charles Lang, in which Peck sits and stares, waiting for Salvaje to enter. Everything is dark except for Peck’s face, the only point of contemplation, in this frame-as-sensorium, where every little movement or sound gives one away. In the end it is a sliver of light that marks Salvaje’s downfall, and the beginning of a new, protective family unit, awake to the world around them.

I am very indebted to Kent Jones’ article on The Stalking Moon in Film Comment.

2 thoughts on “THE FILMS OF ROBERT MULLIGAN, PART 2”