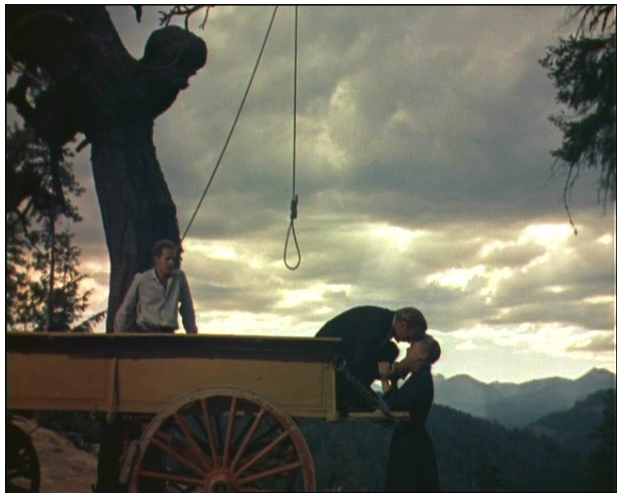 The Hanging Tree (1959) is a Western marked by illnesses and maladies, a portrait of a violent man at war with his own impulses. It deploys Gary Cooper as a crumbling totem, the actor’s aching hip tipping his performance from his famous underplaying into a kind of pained decrepitude. It is one of Cooper’s most emotionally wrenching turns, as he is seemingly aware that he was reaching the end of his career, which would end with his death in 1961. Then there is the sickness that felled director Delmer Daves over halfway through the shoot, necessitating that Karl Malden take over behind the camera, using Daves’ storyboards as guides. These sicknesses are made legible in the film, from the name of Cooper’s character, Doc Frail, to the sun exposure that fells Elisabeth (Maria Schell), the Swedish immigrant who Frail nurses back to health, and who tests the boundaries of the doctor’s seemingly impenetrable emotional defenses. Long unavailable in its original 1.85:1 aspect ratio, the Warner Archive has released a handsome anamorphic edition of the film on DVD, transferred from an inter-negative. There is some light print damage, but nothing to detract from the grandeur of Daves’ compositions, shot on location in the Oak Creek Wildlife Area outside of Yakima, Washington.

Cooper personally shepherded the project at Warner Brothers, the second film he produced following Along Came Jones (1944), through his Baroda Pictures imprint. His daughter Maria told Lou Lumenick at the NY Post that, “The story meant a lot to him. He was a Montana boy and had a real resonance with the characters and the drama of the era when there was a push to stake claims. He was born in 1901 in Helena when it was a funny mixture of a rough and ready town at the same time Montana had more millionaires than any other state in the union. Helena even had a hanging tree, so that was not a foreign dramatic touch to him.” The story was adapted from the 1957 novella by Dorothy M. Johnson, and regards the arrival of Doc Frail into the gold rush town of Skull Creek, Montana. He hides  wanted thief Rune (Ben Piazza) at his cabin, but asks for a form of indentured servitude in return. Rune reluctantly agrees, for a while, if only to avoid capture. So when Elisabeth is discovered in the desert, half-mad and blind, Frail and Rune are tasked with healing her. They go about their task increasingly insulated from the madness growing outside their doors, as gold fever has whipped up the town in an anarchic frenzy, encapsulated in the raving, violence-mongering preacher Grubb, played with grandiose menace by George C. Scott, in his indelible big screen debut.

This outside sickness, one of extreme individualism, is one that Frail is sympathetic to, having been burned by intimate relations in the past. So as the trio of himself, Elisabeth and Rune develop into a loving co-dependency, he cuts them off. Warm and giving when they are in need, Frail cannot stand the sight of the others when they have grown self-sufficient, the power relations shifting against him. There is an unsettling shot where Frail walks Elisabeth out to a cliff’s edge and determines that her sight is returning. The shift in his tone from solicitous caretaker to distant acquaintance is chilling in its swiftness and severity. It is clear that Frail has performed this act before, forever retreating back into himself. Daves repeatedly frames them against the dizzying rocky slopes of the Oak Creek Wildlife Area, images of serenity that ironically contrast with the relentlessly neurotic and interior Frail.

Despite her near-death experience, only Elisabeth seems truly comfortable in the land, opening a gold panning outpost with gusto, eager to work as much as any man. This confuses her dopey macho assistant Frenchy (Karl Malden), who with his floppy hat and head bob, looks like a schnauzer begging for treats. He is an idiot, and one who does not seem to have advanced beyond Freud’s polymorphous perversity stage, believing that everything and everyone around him is available for his pleasure. Frenchy is the representative of the town’s descent into narcissistic madness. Frail recognizes himself in Frenchy, in their selfish rejection of society. Perhaps this is why Frail turns aggressively violent in Frenchy’s presence, a bitter rage which results in a scene of shocking violence at the same cliff where Elisabeth regained her sight.

Malden not only gave a singularly unsettling performance, but saved the project from imploding. According to the AFI Film Catalog, production began on June 17th, and Delmer Daves’ sickness forced him to leave on July 25th. For the rest of principal shooting, which lasted until August 13th, as well as post-production, Karl Malden took over as director.  He recalls this period to Rose Eichenbaum in The Actor Within:

During the last two weeks of the picture, the director got sick and went to the hospital. So I got a call on Saturday to come over to Coop’s house. I get there, and he says they might have to close down production. ‘That’s too bad’, I say. So he says, ‘why don’t you finish directing this picture?’ ‘Me?’ ‘You can do it, you directed Widmark in Counter Attack. You can do it.’ So I said okay, but if I find that I’m lost and I don’t know how to do it, and we have to sit there and figure it out, don’t scream at me.’ ‘Kid,’ he said, ‘I’ve never spoken angrily to anyone in my life, and I’m not going to start now.’ So I accepted and directed the picture for two and a half weeks. When it was finished, Gary Cooper went over to Warner’s and said to them, ‘star billing!’ That’s the first picture in which I ever got star billing. That’s the kind of man Gary Cooper was.

In order to depict the destructive community of Skull Creek, which burns itself alive in a drunken revelry of greed, the production team had to function as a supportive one. Cooper had a chronic bad back as a result of a broken hip he had as a teen which was never set properly, and it was bothering him mightily on the set. He couldn’t sit side-saddle on a horse, as Marie Cooper tells Lumenick, so a special saddle was created where he would be perched off to the side. This worked for his character, allowing him to literally talk down to the characters Frail is so desperately trying to separate himself from.

The Hanging Tree is a fragile Western, one in which psyches are as easy to shatter as entire communities. Money is both their curse and their salvation, able to put their necks inside a noose as well as buy their way out of it.  The only thing it can’t seem to purchase is happiness, at least that found outside of a bottle. The final shots, in which Elisabeth divests herself of all her gold and land, and instead nuzzles Cooper’s downturned head, are some of the most radical, and radically moving, in the Hollywood Western.