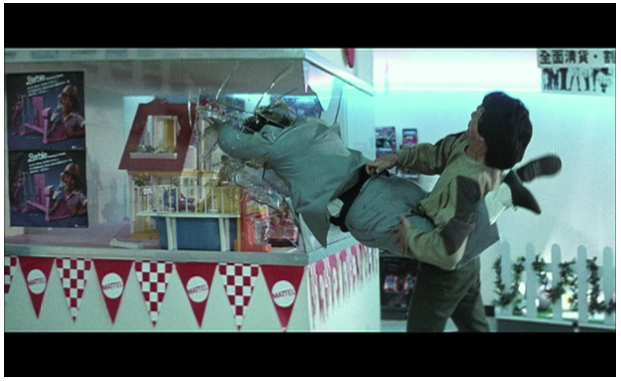 Failing as a stoic Bruce Lee clone early in his career, Jackie Chan discovered that audiences preferred him as a cheery masochist, enduring abuse for fun and profit. His kung-fu clowning in Snake in the Eagle’s Shadow and Drunken Master (both 1978) established a persona he would tinker with the rest of his career. When he shifted from martial arts period pieces to modern day action thrillers in the 1980s, his drifting fool becomes professionalized, an innocent goofball in uniform. His masterpiece of this period is Police Story (1985), which was recently issued on Blu-ray by Shout! Factory, along with its initial 1988 sequel, Police Story 2 (1988). Chan has made five Police Storys to date, with a sixth in production set for release later this year, but the original remains his (and my) favorite.

Before starting work on Police Story, Chan suffered through an ill-conceived Hollywood project, The Protector. Although shot in Hong Kong, Director James Glickenhaus (The Exterminator) refused to work in the local style. Glickenhaus recalled, “They never shoot masters, they shoot very short sections and they do a lot of under-cranking to speed up the movement, which I refuse to do. I told him I wanted to shoot the fights in masters and then, if they didn’t work, go back and cover them.”   Chan preferred to shoot stunts in segments, allowing time to perfect each gesture. He went along with Glickenhaus’ plan, but re-shot sequences behind his back and inserted them into the version released in Asia. It was a box office failure, and Chan wouldn’t have stateside success until the 1990s.

Following that disheartening experience, Chan exerted complete control over Police Story, as actor-director-fight choreographer. The script was written by long time collaborator Edward Tang, who Golden Harvest assigned to work with Chan on Dragon Strike (1982, aka Dragon Lord), and who has become the caretaker of the Chan persona. While Chan’s bricolage fighting style, in which everyday objects are transformed into weapon, had been developed with Yuen Woo-ping in Drunken Master, his screen personality was still in flux.

While he was in Hollywood for his first busted project, The Big Brawl, Chan spent time watching a lot of silent films: “Buster Keaton, Harold Lloyd. And what they did was amazing. Buster Keaton gave me a lot of ideas, new things I could do that were physical or funny, but wasn’t fighting.” Like Keaton in vaudeville, Chan was raised in the entertainment business, his destitute parents dropping him off at the Chinese Opera Research Institute in Hong Kong when he was six to learn the art of Peking Opera tumbling. There are many silent film homages in his blockbuster Project A (1983), including a dangling clock face gag straight out of Lloyd’s Safety Last! (1923).  In Police Story, the influence becomes more internalized, the gags less referential and more tailored for Chan’s particular skills.

In Police Story he plays Chan Ka-kui, an impetuous cop protecting a reluctant witness (Brigitte Lin) against reprisal from crime lord Chu Tao (Yuen Chor). Chan naively believes in outdated concepts of heroism, eager to risk life and limb and acres of private property in order to catch his man. He is like a child living out a heroic fantasy, ignorant of the pragmatic compromises his colleagues and superiors agree to in order to protect their asses. There is a bit of Douglas Fairbanks Sr. in this, as his characters were also men out of time, as seen in A Modern Musketeer, in which his chivalric code nets him a slap to the face. Chan’s triumphant capture of Chu in Police Story gets him a demotion to traffic cop in the sequel, due to his spectacular destruction of a shanty town as well as an entire shopping mall.

These are sequences of manic energy released into death-defying punchlines. Chan deflects violence with his body and turns it into humor, a flesh and blood Wile E. Coyote. The opening is a close-quarters shoot-out in an HK slum that escalates into a car chase/destruction derby that reduces the hovels to rubble. His car a wreck, he chases down the escaping bus by latching on to the bumper with the crook of an umbrella, feet dragging on the asphalt (the way he snaps himself onto the back of the bus recalls Yakima Canutt’s famous stagecoach stunt). In the shopping mall finale, he crashes through every available glass surface, some with the help of a motorcycle in a bit of conspicuous destruction.

These are all shot in segmented close-ups, the style so despised by Glickenhaus, but it gives Chan’s stunts a gestural clarity and immediacy absent from the usual master shot/close-up routine. This way his moves are linked, unfurling as if in one ribbon of movement, while the alternating focal lengths of Glickenhaus necessarily breaks up that rhythm. Chan’s style allows the impossible to occur with speed and fluidity, an ethos exhibited even in offhand moments. At the start of an extended telephone answering gag (he gets tongue-and-wire tied), Chan flips up a pencil with his foot and catches it with his hand. It takes a split-second of screen time but a lifetime to master, making the impossible look like a flick of the wrist.

The image quality on the Shout! Factory Blu-Ray is poor, as the prints they transferred are faded and worn. The Hong Kong release also received negative reviews, but the Shout! disc doesn’t exhibit any of the transfer artifacts mentioned there. I doubt there is better material to work with, so unless someone unearths a pristine negative, this new disc is likely the best the film can look right now.