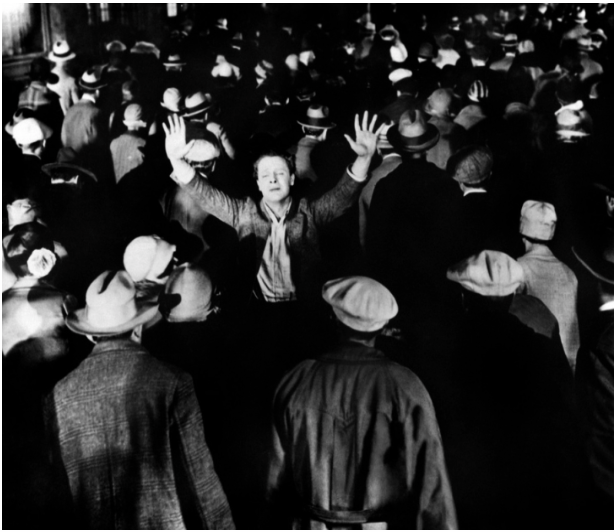 Earlier this month Turner Classic Movies began airing The Story of Film, a 15-chapter documentary by Mark Cousins tracking the history of the moving image from 1895 – 2000s. Running from now through December,TCM will also air 52 movies that Cousins mentions in his work. To coincide with The Story of Film Chapter 2: 1918 – 1928, tonight TCM will air everything from Nanook of the North (1922, 8PM) to King Vidor’s silent masterpiece The Crowd (1928, 2AM). While Nanook was recently issued on Blu-ray, The Crowd is only available on out-of-print VHS, so this airing is a rare opportunity to see it in a decent edition. George Feltenstein, the Senior Vice President of Theatrical Catalog Marketing at WB, recently wrote that the home video future of The Crowd depends on the sales of Vidor’s The Big Parade, which comes out on October 1st. It was originally because of the The Big Parade’s massive success that Vidor was allowed to make the smaller, artier The Crowd, so maybe it will have the same effect on WB executives today. Like Murnau’s Sunrise (’27) or Paul Fejos’ Lonesome (’28), The Crowd depicts the trials of the everyday with expressionistic intensity, proving that the working man is as worthy of tragedy as royalty.

MGM producer Irving Thalberg asked Vidor what he would do to follow up the success of his WWI drama The Big Parade, and Vidor replied, “Well, I suppose the average fellow walks through life and sees quite a lot of drama taking place around him. Objectively life is like a battle, isn’t it?” He sketched out an original story with Harry Behn about the trials of an office worker who can never get ahead, but spent a long time searching for an actor who held the everyman qualities he was looking for. According to Vidor, he found  James Murray at the MGM casting office looking for employment as an extra. Murray had the hardscrabble background Vidor was seeking, having worked his way to California as a dishwasher and coal-shoveler. Though it seems Murray was plucked from obscurity, he had already secured lead roles in MGM’s In Old Kentucky (’27) for director John Stahl and the Joan Crawford drama Rose-Marie (’28). Regardless, he had a roughness that Vidor favored that he felt was ideal for The Crowd. Offscreen Murray struggled with alcoholism and depression, and following his soulful performance for Vidor, he descended into poverty, and was found dead in the Hudson River in 1936. Vidor was so affected by Murray that he attempted to tell his life story in a never-produced movie called The Actor as late as 1979.

In The Crowd, Murray plays John Sims, a tough-luck kid born into privilege but shoved into the underclasses after the death of his father. He moves to NYC with hopes of reviving his fortunes, and joins an advertising firm as a low-level accountant. That’s as far as he rises, having to scrimp and save to care for his wife and children. Tragedy lowers their income from precarious to poverty, and to Sims the world seems like an ever-tightening noose.

From the start Vidor depicts the city as a heaving mass, an active agent in thwarting Sims’ progress. When John learns of his father’s death, he is ascending a staircase, the camera pointing downward from a height, the crowd below a vertiginous blur. Height will be a destabilizing force throughout. When John first arrives in NYC, Vidor employs a series of superimpositions of traffic, crowds and trains that climaxes in a low angle of skyscrapers, sentinels staring down at the masses. In one of the most quoted shots in film history, Vidor than tracks the camera up the face of one of these buildings, with the use of a miniature, before plunging into a top floor window and peering into John’s new office, filled with ant-sized desks. The camera glides over the workers until it settles onto John, a member of the crowd for now, going with the flow. He coasts on this flow, even participating in the angles, he will peer up a doubledecker bus ladder up the skirt of the woman he will later marry.

He proposes marriage to Mary (Eleanor Boardman, Vidor’s wife) after seeing an advertisement on a bus saying, “You furnish the girl, we furnish the home.” His actions seem dictated by “the crowd”, his eagerness to fit in with an upwardly mobile society. But as soon as he takes those steps the world starts to conspire against him. It begins with everyday objects in his dingy one-bedroom apartment he shares with Mary. The Murphy bed won’t fold up and the bathroom plumbing springs a leak. The implied contract he signed with big city society is not being fulfilled – the advertisements promising a sun-filled “home” were telling lies. His initial joyousness at entering a loving relationship dissipates into bitterness, exemplified by a bottle of milk exploding in his face. The world is rebelling against him. It is here than he exclaims that “marriage is not a word, it’s a sentence.”

Separation is delayed by children. Both Mary and John decide to give their union another shot because of their son, and then their daughter. Their attempt is sincere, and Murray’s desperate search through a labyrinthine hospital to find his first-born is a nightmare of indifferent bureaucracy, the soulless efficiency of his workplace transplanted to a facility supposed to house his salvation. Murray pushes through a triangle of hospital beds to meet his wife and child, and the look of desperate beatitude on his face is heartbreaking.

Since their bond is with the child and not each other, John and Mary are always separated in the frame, until an untimely death shears them completely apart. In a funeral car they are pushed to extreme edges of the frame, eager to burst out of each other’s lives. Vidor struggled mightily over the ending, as seven were shot, and theaters were given two options to screen. One was a super-happy ending gathered around a Christmas tree, the other more ambiguous, with the family unit intact but still struggling. The latter is the one that survives in existing prints, with John crawling back into employment and buying his family tickets to a vaudeville clown act. The camera glides over the laughing crowd, ending by lifting straight up away into the sky, into the heavens the Sims can never quite reach. While it offers hope, it is a temporary one. For as the inter-titles state, “The crowd laughs with you always…but it will cry with you for only a day.” This laughter and this happiness, Vidor implies, will last only this night, until the hard work of living begins again.