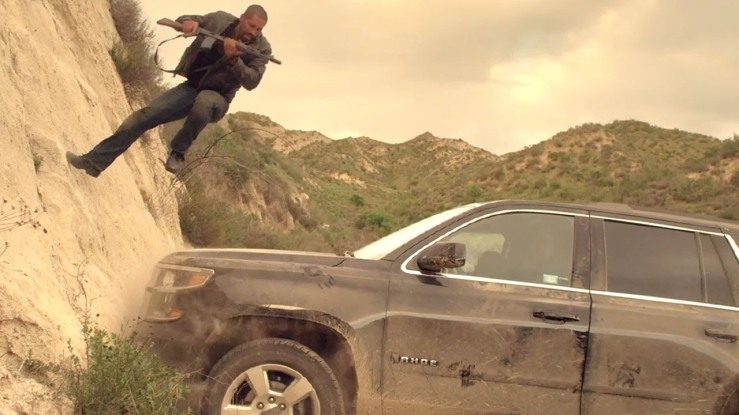 As with their blockbuster brethren, direct-to-video action movies thrive on previously existing brands. These cheaply made concoctions can’t afford to license comic books, so they market personas instead, whether it’s Van Damme,  Lundgren, or even Cuba Gooding Jr. While their careers as major stars were brief, fight fans flock to the familiar, so these nostalgia acts are essential to secure production funds, even if they only appear in a scene or two. This doesn’t account for the burgeoning cult surrounding actor-director duo Scott Adkins and Isaac Florentine. Adkins is the rare performer who has made himself a bankable star inside of the DTV universe, despite having only landed bit parts in major films outside of it (The Expendables 2, the upcoming Doctor Strange). He is unknown among the general public, but Adkins and Florentine’s defiantly old-fashioned attitude regarding the shooting and blocking of fight scenes have made them cult heroes among the small but vocal DTV action film fanbase. Close Range is their eighth film together, and it is distilled down to the basics. A revenge drama set on the U.S.-Mexico border, it pits Adkins against a drug cartel, whom he dispatches in a series of increasingly bloody showdowns. The action takes place mainly along one rural dusty road where Adkins goes one-on-one with an SUV and one-on-dozens during an extended siege. Available on VOD and iTunes December 4th, with a limited theatrical run December 11th, Close Range is a satisfying back-to-basics brawler.

Ninja: Shadow of a Tear (2013) was the most recent Adkins-Florentine collaboration, a spectacular throwback to the martial arts films Cannon was producing in the ’80s. Close Range has more of a Walking Tall vibe, of corruption eating away at a small town until a principled psycho tries to clean it up.  The script was written by DTV vet Chad Law (Van Damme starrer 6 Bullets) and Shane Dax Taylor, which sends sullen ex-soldier Colton MacReady (Adkins) on a mission to rescue his kidnapped niece Hailey (Madison Lawlor). She was nicked by a Mexican drug cartel led by Fernando (Tony Perez), who are using her as leverage to get money owed them from her stepfather Walt (Jake La Botz). During the rescue, Colton swipes a flash drive which contains all of the cartel’s records. So the gang follows him home, and the war will never end until one side is wiped out.

Adkins is still a work-in-progress as an emoter, but here he isn’t asked to do much other than glower and spin-kick, which is what the man was born to do. Trained in taekwondo and kickboxing, Adkins has the agility of a dancer, and once he gets those long-levered limbs going he is a joy to watch.  Fight choreographer Jeremy Marinas is the one pulling his strings, one of the many great talents coming out of 87Eleven Action Design, the stunt rigging/rental/training organization led by Chad Stahelski and David Leitch, the directors of John Wick. Marinas has Adkins work a lot in close brawling combat here, playing off of Colton’s presumed training as a soldier. This is not a martial arts showcase, but exhibits fights that are going for the quick kill. This is evident in Marinas’ cameo as a hired goon whom Adkins dispatches with a flick of his belt knife, a necessary accoutrement for any aspiring vigilante.

Florentine is not a flashy director but a cogent one, wanting his films to be showcases for the stunt performers (he is a trained martial artist himself). He often films in long shot so no body part is chopped off by the frame. His most attention-getting sequence is placed at the beginning, a long take of Colton fighting his way through a hallway and into the cartel’s office. Adkins told the Action Elite site that they had half-a-day to shoot the sequence, managing to get six or seven takes. It is more elaborate than a similar shot in Ninja: Shadow of a Tear, in which Adkins hip-tosses his way through a dojo. In Close Range the action is more fluid, a less-mechanical hitting of spots. But I vastly prefer the more traditional fight sequences in Florentine’s films, in which mini-narratives emerge of strikes and counters. These single take fights are Adkins as battering ram.

Though he has found success in DTV, Adkins is openly critical of the limitations it places on Florentine and himself. In the same Action Elite interview, Adkins says:

It pushes you more but I don’t think it elevates your game. You get really tired and with that comes lack of focus and you can’t concentrate like you should be. The action stuff is not easy, it’s always hard because we are pushing to do great stuff but it’s something I know like the back of my hand, but then you have to go from spending ¾ of the day doing a really intense fighting sequence in the heat and then have to go and deliver as an actor at a time when you are feeling just shattered and just want to go to bed. I want to deliver the action as much as I deliver the drama and if it’s a low budget you haven’t got the time to always do that – I wish we had more time to deliver on both fronts but that’s also the charm of some of these films. We are almost nostalgic in the way we make these movies. They are like a throwback to the eighties and early nineties.

He also admits that they had trouble reaching the required minimum running time for the feature, necessitating an incredibly long sequence identifying each member of the drug cartel, despite most of them having no lines or identifiable characters. These films consist of an endless series of artistic compromises, but these are the allowances the DTV action film fan makes for any Adkins-Florentine production. There will be stilted supporting actors, threadbare sets, and hand-me-down plots, but once the fists start flying, their artistry becomes as undeniable as a kick to the kidney.