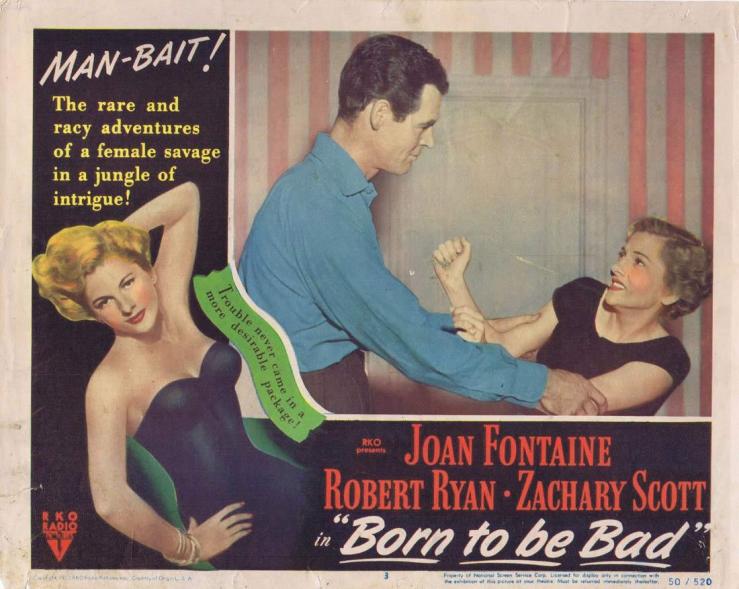 The Warner Archive continues to release an enormous amount of the WB back catalog, at a rate impossible to keep up with. Here is my vain attempt to catch up, covering a group of four films made up of bad men and one very bad woman. The most famous title is Nicholas Ray’s Born to Be Bad (1950), a devious noir/woman’s picture in which Joan Fontaine uses her seductive wiles to marry the heir to a family fortune. Then there is a trio of manly ne’er do wells, with Peter Graves leading a mercenary force in the spaghetti western The Five Man Army (1969), Robert Mitchum doing the same in a priest’s habit in The Wrath of God (1972), and Rod Taylor carousing his way through Dublin in Young Cassidy (1965).

Nicholas Ray shot what was then titled Bed of Roses in 35 days, from June 20th to July 30th of 1949. It was a project that the head of RKO, Howard Hughes, had indefinitely postponed in 1948, one of the provocations that caused the production head Dore Schary to quit. It had gone through seven screenwriters and five directors before Ray took over, with Joan Fontaine in the lead role. Even Fontaine was wary, with her husband William Dozier writing to Hughes, “I’m afraid Joan’s enthusiasm for this project has not heightened any with the passage of time.” It was an adaptation of the 1928 novel All Kneeling by Anne Parrish, divulging the seedy story of Christabel Caine (Fontaine), a manipulative ladder-climber eager to seduce every man she meets and then marry the one with the most money. Her target is Curtis Carey (Zachary Scott), the scion of a wealthy family already engaged to Donna (Joan Leslie), the whip-smart assistant to Christabel’s Uncle John, a publisher. Christabel also has the acidically funny Nick (Robert Ryan) on a string, who is one of John’s up and coming authors. Despite all the studio snags, Ray orchestrates a deliciously cynical melodrama of sexual power plays. It is a movie of lush upper class interiors, and Ryan has the characters constantly shifting in the frame, as seen in the bravura opening sequence, in which Donna is preparing a dinner party. Donna is a blur of preparatory focus, walking in and out of rooms while Ray returns to a fixed shot of the hallway. Eventually Donna is speedwalking toward the camera, and trips to the floor over a suitcase inconveniently placed in the hall. It is the introduction of Christabel, who is sitting patiently in a room to the right. In this clever bit of choreography, Christabel is visualized as a roadblock to Donna’s best-laid plans.

Ray is aided by richly layered performances from Fontaine and Ryan. Fontaine uses a girlish hair-flipping exterior to hide her designs, letting diabolical smiles slip out once the other characters leave the frame. Ryan is a wisecracking rogue who sees through Fontaine’s exterior, describing her dual personality to her face, and yet unable to tear himself away from her. In a damning kiss off at one of her ballroom parties, following her marriage to Curtis, Ryan tells her, “I love you so much I wish I liked you.” And yet a few scenes later he’s back in her arms, ready and willing to believe her latest bedside conversion.

If Born to be Bad exhibits the genius of the Hollywood studio system, then The Five Man Army is representative of that system’s decline. As the Paramount Decision dismantled the vertical integration of studios, they scrambled to find new ways to gain audiences. The spaghetti western was one such avenue, and as the success of these products became clear, studios cut in on the action. The Five Man Army is a U.S.-Italy co-production distributed by MGM. Although Don Taylor is credited with directing the film, various reports have producer Italo Zingarelli (the pseudonym of director Giulio Questi) and even the young co-screenwriter Dario Argento taking the reigns after Kelly had to depart early to take on a TV production. There is a marked difference between the early, dialogue heavy scenes and the epic, almost wordless train heist takes up nearly the entirety of the last half-hour of the film. I haven’t found any reliable sources on the matter, but whoever ended up sitting behind the camera, it’s an effective Seven Samurai/Magnificent Seven style mercenary film, capped by a surging Ennio Morriconne score and that extraordinary finale. Peter Graves, then famous for his role on Mission Impossible, headed the international cast, which was made up of mountainous Neapolitan tough guy Bud Spencer, the stereotyped silent Japanese “Samurai” (Tetsuro Tanba), tiny Italian firecracker Nino Castelnuovo, and Midwestern American James Daly. This roughshod group follows Graves’ immaculate white helmet hair in his attempt to rob an army train filled with gold.

The Wrath of God (1972) is a similarly post-Paramount Decision product, filled with aging Hollywood stars and

shot in Mexico. Robert Mitchum, in a nod to his seminal psycho in The Night of the Hunter, plays a lapsed priest, only this time he’s a robber during the Mexican Revolution, using his priestly garb as a passkey through the country. It also features Rita Hayworth in her final feature performance, playing the mournful mother to Frank Langella’s psychopathic son. Mitchum is rounded up by a local strongman to take out Langella, aided by a feuding Englishman and Irishman – Jennings (Victor Buono) and Emmet (Ken Hutchison). Mitchum is as laid back as ever, his laconic priest passively taking in the casual indignities and random slaughters imposed upon the Mexican people. But when he finally rouses himself into action, and flings a tommy gun from behind his robes, it’s a deliriously entertaining moment.

There is nothing so daring about Young Cassidy (1965), a rote bio-pic about the early years of Irish playwright Sean O’Casey (named John Cassidy in the movie – one of O’Casey’s pseudonyms). Originally developed by John Ford, he had quite the job when assailed by a strep throat (and his usual alcoholism), and DP Jack Cardiff stepped into the director’s chair. Ford biographer Joseph McBride suggests that Ford was unhappy with the script and casting, and that his ailments were intentionally self-inflicted to get him off the film. The producers denied his request to shoot in black and white and refused to let him shoot in the old-fashioned Limerick instead of the modernized Dublin. Sean Connery was originally cast in the O’Casey role, but had to back out when he had to fulfill his contract in the James Bond film Goldfinger (1964, released before Cassidy). So instead of the Scot, the Australian Rod Taylor took over the role. He manages a decent Irish accent, but gets lost in the episodic script, which is a succession of disconnected macho escapades. The pleasures of the film are exclusively provided by the actresses – a luminous, playful Julie Christie as a Dublin prostitute, and a furtive, hesitant Maggie Smith as O’Casey’s patient girlfriend, until that patience runs out.

As ever, the Warner Archive is an essential resource for the curious cinephile, whether you’re an auteurist or a genre aficionado. This post hopefully suggests that it’s more fun to be both.