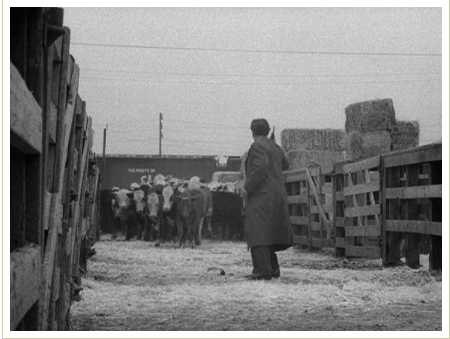 Like a herd of cattle ready to run down a restive kidnapper, Olive Films bursts into stores today with a phalanx of five DVDs licensed from Paramount Pictures: Union Station (1950), Appointment With Danger(1951), Dark City (1951), Crack in the World (1965), and Hannie Caulder (1971). A wholesale distributor and retailer of independent and art-house releases, Olive is now expanding its own acquisitions slate, starting with this brawny group of  genre titles. With multiple studios now experimenting with the mixed blessings of burn-on-demand technology (more releases, but higher prices and less quality control) for their library titles, it’s encouraging that a company is still willing to put out fully authored discs, in strong new transfers.

With the forthcoming, and essential, Josef Von Sternberg collection coming from Criterion, it’s clear that Paramount is becoming more aggressive in licensing its material.  Olive will release 27 Paramounts over the next year or so, including Nicholas Ray’s The Savage Innocents, Otto Preminger’s legendary and fascinating flop Skidoo, and Ingmar Bergman’s Face to Face. I spoke with the Director of Acquisitions and Sales at Olive, Frank Tarzi, and he confirms that much more is on the way. Olive has closed deals with multiple studios, and their future slate shows off adventurous and eclectic taste, with Tarzi confirming the following: Robert Aldrich’s Twilight’s Last Gleaming, Billy Wilder’s Fedora, Rainer Werner Fassbinder’s Despair, The Stationmaster’s Wife (uncut), and I Only Want You to Love Me (uncut), Abel Gance’s J’Accuse, Claude Chabrol’s Ophelia, and, most exciting of all, Jean-Luc Godard’s complete Histoire(s) du cinema.

But enough of the tantalizing future.  Union Station is a taut, architectural noir from Rudolph Maté, the ace Polish cameraman who lensed Carl Dreyer’s Passion of Joan of Arc and Vampyr. His career in Hollywood never reached those aesthetic heights, but he was a consummate craftsman with an eye for visual detail. Here he’s given a police procedural about the kidnapping of a blind girl, and although set in Chicago, much of it was shot at Los Angeles’ Union Station (Thom Anderson pinched some scenes for Los Angeles Plays Itself, his history of L.A. on film).

Maté maps out the station with a near 180 degree pan, taking in the information booth and the crowds before settling on the STATION POLICE HEADQUARTERS sign. In the same shot, he then tilts up to a filigreed window which houses the station’s security services, where William Holden barks irritated orders to his indolent staff. Knowing every inch of his turf, he seems to blend into the walls when peering around corners for the jowly perps he’s tailing. The attention to spatial detail turns the film into a documentary of Union Station, with the plot just an excuse for exploration.

Holden’s expertise is gained through repetition, and he looks appropriately bored throughout. It’s just his job, after all. In the study that essentially defined “film noir”, Raymond Borde and Etienne Chaumeton’s Panorama of American Film Noir, 1941-1953 (first published in 1955), the writers compare it unfavorably to He Walked By Night, but find some saving (violent) graces:

“The film is interesting, though, for showing how the security services of a big train station work. Aside from the ill-treatment inflicted on a blind girl by her kidnapper, there are two scenes of momentarily authentic noir cinema: a gangster flattened during his escape by a stampeding herd of steers maddened by gunfire [top image]; the pressing invitations to spill the beans exercised by the cops on an untalkative accessory to a crime. After giving him a working over using state-of-the-art methods, they drag him onto a platform overlooking the railroad track. “Make it look accidental,” the police inspector orders. When a train passes beneath, they grab hold of the “tough boy” and make as if to push him off [see left]. The guy immediately screams that he’ll “talk,” and he’s led away distraught, ready to sell out father and mother alike.”

Dark City is an altogether seedier affair, a story of greedy low-lifes who bilk a sucker out of his cash, driving him to suicide. No big deal, except the dead man’s psychopathic brother targets them for strangling. Charlton Heston, in his first starring role, is the most sympathetic low-life, Danny. But when the competition is Jack Webb at his sleaziest, playing a dirtbag named “Augie”, it’s not much of an accomplishment. Directed by Hungarian emigre William Dieterle in looming close-ups and dramatic chiaroscuro from DP Victor Millner (who has an incredible resume), it’s a woozy, sluggish and occasionally haunting noir about guilt, failure, class and forgetting. Danny is a college grad and army vet, and so, the police captain tells him, he has no excuse to live the life he does, not like the street boys he runs with.

Heston plays him as somnolent and dreamy, his every line pulled out with stubborn slowness, like Robert Mitchum on vicodin. It’s a hypnotically effective performance, of a man who no longer wants anything to do with his body. He repeatedly tells his ignored girlfriend Fran (Lizabeth Scott), of his need to be alone, but she still loves him anyway. James Naremore, who has written the best recent book on noir, More Than Night, offers an adolescent memory of the film in his introduction: “What I remember best are the fetishized details – Lizabeth Scott’s unreal blondness and husky voice in Dark City, or Edmond O’ Brien’s rumpled suit as he runs desperately down the crowded street in D.O.A. [directed by Rudolph Maté]“. To that I’ll add one more: Harry Morgan’s fake upturned nose, a physical marker of his pugilist past and the cause of his punchy good humor. He’s been knocked silly once too many, but Morgan’s ebullient and melancholic turn makes him much more than a punchline.

Appointment With Danger re-teams Webb and Morgan, the future Dragnet partners, and this time they’re both hoods. They are planning a heist with the heavy-lidded Paul Stewart, but an errant corpse spied by a nun sets the plot machinery in motion. Alan Ladd is the cynical motor, an expressionless slab who is smart enough not to impede the snappy dialogue by Richard L. Breen (who would later pen the Dragnet movie) and Warren Duff (“Love is between a man and a .45 pistol that won’t jam”). He plays a postal inspector, one of the raft of government employees feted in procedurals of this era (including Holden in Union Station).

I relinquish the rest of this review to three separate pieces from Manny Farber:

“Appointment With Danger is a fascinating textbook on the Average American Flop – his speech, mien, sage misanthropy, doubt. It is also a well-done report on the geography of Gary, Indiana, a place that seems crowded with failures.”

“Tight plotting, good casting, and sinuously droopy acting by Jan Sterling, as an easily had broad who only really gets excited about – and understands – waxed bop.”

“A YMCA scene that emphasizes the wonderful fat-waisted, middle-aged physicality of people putting on tennis shoes and playing handball.”

And I will note one last notable occurrence: Harry Morgan’s quavering face as he gives a speech about his estranged son, protesting that he will not run off to St. Louis to avoid the heat of being named to the cops. His features are close to collapsing, but he re-harnesses them in a flush of machismo. He mentions his son’s bronzed booties. Webb than takes one of them and beats Morgan to death.