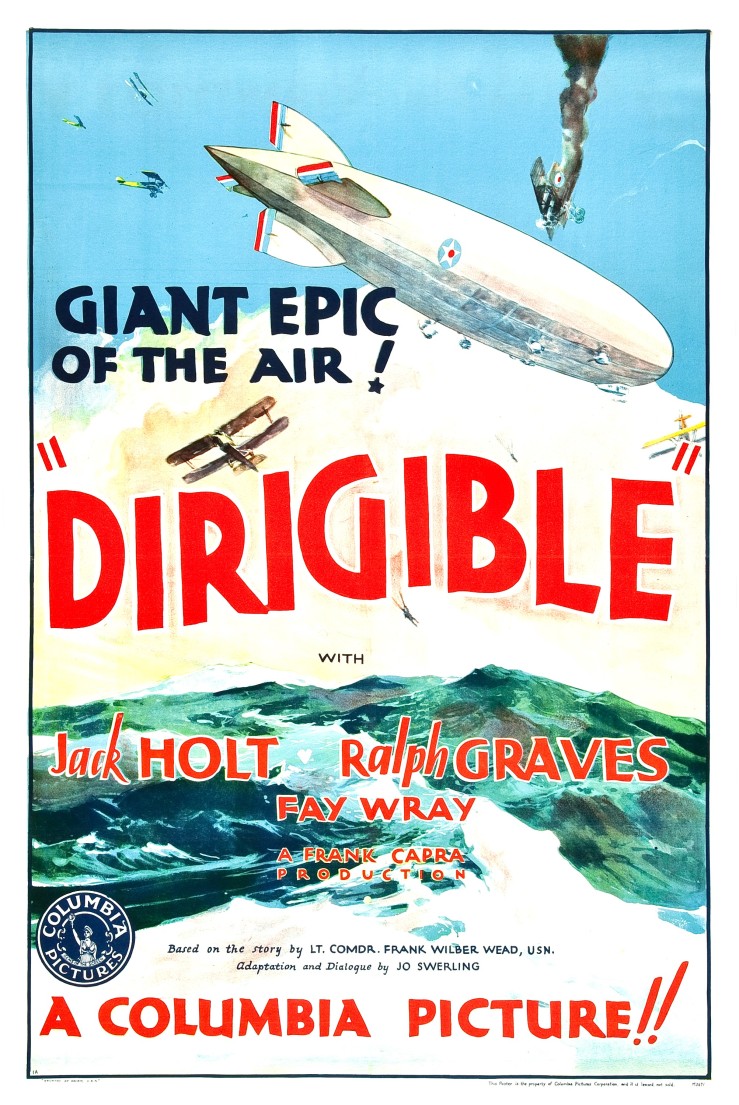 Summer movie season is already upon us, with superheroes saving the world from various varieties of destruction. I’m turning back the clock to 1931 to look at a disaster film that uses the same playbook, Frank Capra’s blimp inferno Dirigible (For the throngs of readers who have been following my Jean Renoir series, it is taking a month-long break, returning on July 18th). Dirigible‘s thrills are premised on scale, on framing the enormity of these cruising zeppelins against the sky, and realistically rendering the chaos of such a behemoth coming apart at the seams. This was a million dollar production, with a lot of effort at authenticity, and much of the flying footage was shot on real Navy blimps with the compact Eyemo camera (cinematographer Joseph A. Walker says only two insert shots – of a train station and a sealing ship – were stock).  The movie alternates between these awe-inspiring feats of technological wonder and a rote love triangle that barely gets off the ground. This is a movie about the machines, not the people, which makes for dulling drama but stunning spectacle.

Dirigible is the second story credit for Commander Frank Wilbur Wead USN, a WWI veteran and aviation speed freak who advocated the Navy take part in races against Army planes. He would go on to serve as a test pilot before he broke his neck falling down a stairwell in 1926. It was then he turned to writing, becoming an in-demand scribe for air adventures large and small, from John Ford’s Air Mail (1932) and They Were Expendable (1945) to Howard Hawks’ Ceiling Zero (1936). Ford would memorialize Wead’s life in The Wings of Eagles (1957), where he was portrayed by John Wayne. But for Dirigible, Wead seems to have lifted some story elements from the 1929 independent film The Lost Zeppelin, which follows a journey to the South Pole shaken up by a love triangle.

Dirigible follows that story to the letter, except in this Columbia feature the woman (Fay Wray – two years before King Kong) stays home while the men go off and nearly kill themselves. Fay Wray plays Helen Pierce, the buzzkill wife of daredevil pilot Lt. Frisky Pierce (Ralph Graves). Helen had previously been wooed by the more straitlaced Commander Jack Bradon (Jack Holt), but in the end she chose Frisky. Frisky and Jack remain friends somehow, and Jack’s picture remains on Helen’s mantel. In previous drafts one imagines an open relationship was implied (Lubitsch’s Design For Living would base a whole movie on that subject in 1933), but here everything is prim and above board, assuredly to appease the Navy, who cooperated with the production and let them shoot on their massive dirigible Los Angeles.

The Navy partners with explorer Louis Rondelle (Hobart Bosworth) on a journey to the South Pole, and Jack convinces them both that blimps are the safest way to get there. Helen begs Jack not to take Frisky along on the dangerous mission, and Jack agrees, which breaks Frisky’s adventurous heart.Midway through their trip the explorers plow through a vicious storm which tears the blimp in half as if it were papier-mâché. Through judicious miniature work matching the aerial footage, the crash is harrowing stuff. For the aftermath, in which the hulk of the blimp heaves out of ocean water like an alien monolith, Capra shoots in soft focus with an extra layer of matted-on fog. It looks like an etching or woodcut, disaster brought to its elemental basics. While that sequence is artful, almost impressionistic, the majority of the film is after authenticity. Capra was obsessed with the idea of the actors breath being visible on film during the South Pole expedition, even though they had assembled the Antarctic ice cap in the San Gabriel Valley where the temperature was pushing 90 degrees. So Capra went to his pal Professor Lucas at Caltech. “Dry ice, Frank. In the actors’ mouths. That’ll make the breath condense. Put a piece of dry ice in a tiny wire cage.”

Capra went along with this scheme and had his dentist create little wire cages, which he would stick to the roof of your mouth with false-teeth glue.  Capra recalls the results:

“Hobert Bosworth, a noble actor of the old, old school, unfurled the grand old flag, stuck it in the ice, and eloquently announced: ‘In the shname of the Shnooni — Stoonited–“.” He stopped, pulled out the wire cage, and “plopped the square piece of dry ice into his mouth as he would a big pill.” Bosworth would lose three back teeth, two uppers, part of his jawbone, and much dead tissue.” No other actor tried the stunt, and the breath isn’t visible in the finished film, though they do smoke a lot.

Obsessed with the journey he missed out on, Frisky quits the Navy and raises private money to do the trip with Rondelle. This time they will use his trusty biplane to putter their way to the bottom of the Earth. Helen is dyspeptic about this latest scheme, convinced Frisky just wants to get away from her, their life, and his responsibilities at home. She looks longingly at the portrait of Jack, of the stable, boring life they might have had together. So she writes Frisky a Dear John letter, but makes him promise not to reach it until he reaches the South Pole. Helen is a thankless character, the woman-as-killjoy reigning in man’s self-destructive tendencies. And the 23-year-old Fay Wray can do little to enliven a character whose main role is to sit at home and nitpick her husband, but for the split-second she writes this letter, she gains a personality.

But of course Frisky carries on anyway, and this second journey is far more successful, getting them to glide right over the pole. But it’s not enough for Frisky who wants to set foot on that virgin land, but his attempt to land the plane flips it over, stranding them in the true middle of nowhere. The only thing that can save him and their stranded crew is the new supersize blimp, the Los Angeles, which has to motor down to the pole and hope the crew hadn’t frozen to death in the process. The only one who can save them, of course, is Jack in his new supersized blimp, the Los Angeles. So he motors down apace, trying to get there before they all die of exposure. These final sequences in the snow remind one of any number of survivalist mountain climbing movies, including the recent Everest (2015), where the hubris of their cocky leader brings about their own demise.

Dirigible is a durable construction, that, if it was in color and starred Pierce Brosnan, would air with the same regularity as Dante’s Peak (1997). The actors don’t have much to work with, but the effects, in this case real life navy dirigibles, are the stars of the show. And DP Joseph A. Walker and his daredevil cameraman Elmer G. Dyer make them larger than life when in the sky, and as fragile flesh when tumbling to the ground.