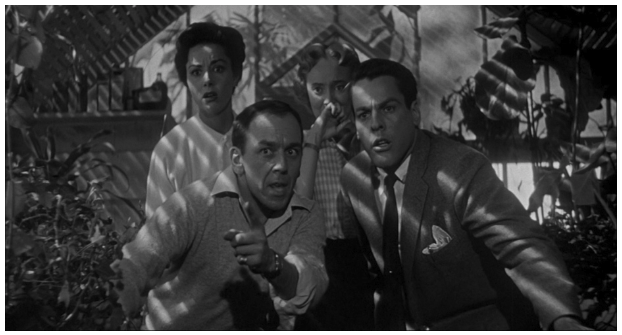 On July 18th, Olive Films will begin their roll-out of the Republic Pictures library with DVD/Blu-Ray releases of High Noon (1952) and Invasion of the Body Snatchers (1956). Republic has long been one of the most underutilized holdings in the home video market, passing from corporation to corporation with little concern for the treasures it contained. But upstart Olive has closed a massive licensing deal with Republic parent Paramount Pictures, and is set to release a flood of material (from B-Westerns to prestige pics) in 2012 that had mostly been overlooked in the digital age. While these first two releases have been well-represented on DVD, it is their premiere on Blu-Ray, and there are plenty of rare gems coming down the pike (all transferred in HD), including Nicholas Ray’s Johnny Guitar,  Fritz Lang’s Secret Beyond the Door and Orson Welles’ Macbeth.

Herbert J. Yates began his career in film processing in 1915. By the 1930s his Consolidated Film Laboratories was a major developer of B-film. As the Great Depression sent many Poverty Row studios into the red, Yates took them over, combining six companies (Monogram, Mascot, Liberty, Majestic, Chesterfield and Invincible) into one Republic in 1935. They made money off of disreputable serials and Westerns, giving daredevil action directors like William Witney endless opportunities to hone their craft on a shoestring budget.

Witney started his career at Mascot, riding horses in films for his brother-in-law, and director, Colbert Clark. Witney directed his first film, The Painted Stallion (1937), for Yates, and remembers the set-up in his autobiography, In A Door, Into a Fight, Out a Door, Into a Chase:

Republic’s main office was in New York where taxes were lower than in California, and Consolidated Film Industries, which made all the release prints, was located next door in Fort Lee, New Jersey. The office in New York City was located at 1776 Broadway…

Then, after Yates bought out the last of the executives from the six former companies, Witney writes, “I will say one thing for him. He screwed a lot of very smart men.” Witney wasn’t one of them, working productively for the company in serials (Daredevils of the Red Circle, The Adventures of Captain Marvel), Roy Rogers Westerns and teen-sploitation (Juvenile Jungle, Young and Wild) until the company was sold in 1959. It was because of money-making B-pictures like Witney’s that Yates had the money to invest in prestige productions like Orson Welles’ Macbeth and John Ford’s The Quiet Man and (the less expensive) The Sun Shines Bright. Yates rubbed Ford the wrong way, as the curmudgeonly director told biographer Joseph McBride, regarding The Sun Shines Bright:

Well, they didn’t ruin it, they couldn’t ruin it. But they cut a lot out of it. You’re working with a stupid lot of people, the executive producers, so what the hell, you’ve got to expect it.

But whatever his shortcomings as a producer and a shameless money-grubber, Herbert J. Yates, through accident or circumstance, funded some of the glories of the Hollywood Classical Cinema, both the high art of Ford and the low of Witney, and for that he deserves our reluctant thanks.

Yates sold his company’s library in toto to National Telefilm Associates (NTA) in ’59, bowing to the rising dominance of television. They had severely curtailed production, and were mainly making their money selling TV rights anyhow.  A Dec. 23rd, 1957 issue of Billboard announces the sale of syndication rights to NBC of 218 features and 15 serials for $3,5000,000, with the writer noting that, “the move by Republic to put its package in active sales is concurrent with reports that the studio is in the process of terminating film production.” At this point the demand for B-pictures had disappeared, as the 1948 anti-trust Paramount Decision had divested the studios of their theater ownership. They could no longer “block-book” their product and force theater managers to run whatever they sent them.

NTA made money syndicating the TV rights, with the rise of cable TV in the 1980s reinvigorating profits, leading them to change their name to Republic in 1986, and producing their own TV shows like Beauty and the Beast (1987). In 1994, Aaron Spelling Productions purchased NTA/Republic, and essentially used it as a distribution arm, and as a name to sell its own projects, completely divorced from the low-budget studio it once was. Now Republic Pictures Home Video would release a Spelling mini-series like James Michener’s Texas on VHS, while Johnny Guitarlanguished in the vaults. This was followed by some swift multinational swallowings, as Blockbuster purchased Spelling, and then Viacom bought Blockbuster. The Republic library then became the custody of the Viacom-owned Paramount Home Entertainment, all by the end of 1995.

There had been sluggish attempts to release the Republic library on home video during this period. Spelling licensed it to Artisan Video in 1995, who released The Quiet Man and a few others until the company was gobbled up by Lionsgate in 2003. Artisan’s rights expired in 2005, reverting briefly back to Paramount, but Lionsgate then decided to renew this license for another six years, starting in 2006. For what must have been effective but arcane accounting reasons, Lionsgate effectively sat on the Republic library. They released the comparatively unknown Arch of Triumph (1948), Only the Valiant (1951), and One Touch of Venus (1948) on DVD, but left the vast, and vastly better known, titles sitting on the shelf.

Once Lionsgate’s laissez-faire reign ended this year, Olive Films leapt into the fray, manically licensing Republic titles from Paramount, and almost immediately putting them into production. In the first few months of their stewardship, Olive will have released more of the Republic library than Artisan, Lionsgate and their forebears combined. As fast as they are releasing them, there are some quality control concerns, but the early returns are encouraging.  Both High Noon and Invasion of the Body Snatchers have received high marks from tech review site Blu-Ray.com, as well as my own eyes. The transfers are clean and sharp with rich contrast. Paramount’s archival wing had obviously had done strong HD transfers on these, and Olive presents them with no digital blow-drying. High Noon comes with a making-of documentary, while Invasion contains no extras, which is the norm for the company. And while Olive has had notoriously poor cover art in the past, their Republic discs all seem to have original poster artwork – a huge improvement over some of their early Photoshop jobs.

While it would have been ideal for Paramount to push its massive resources behind the restoration and release of the Republic library, perhaps it’s more appropriate for the scrappy and relatively under-funded Olive Films to do the job. Releasing its discs quickly, efficiently and with little marketing muscle, the Republic Pictures library has finally found a licensor that can match its huckster spirit, and that has the smarts to take advantage of other companies’ mistakes.