In the flurry of interviews Martin Scorsese granted running up to the release of Shutter Island, he rattled off a long list of movies he screened for his cast, including Laura, Out of the Past, Cat People, I Walked With a Zombie, and The Seventh Victim. The first two were studied by DiCaprio and Ruffalo to look good in a rumpled suit (thanks to Dana Andrews and Robert Mitchum), while the last three, of course, were churned out by Val Lewton’s miraculous horror unit at RKO, a remarkable run of terror keyed off of the suggestion of violence rather than the blood and guts themselves. But the main wellspring of Scorsese’s recent box-office champ are two later Lewtons, which he also mentions: Isle of the Dead (1945) and Bedlam (1946) [Spoilers abound below]. 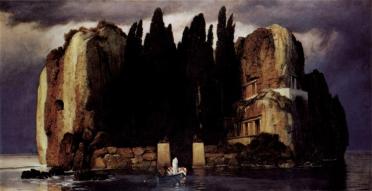 The screengrab above is from an early shot of Isle of the Dead, a dead-ringer for Leonardo DiCaprio’s opening journey towards a ghostly island of his own in Shutter Island (the model for both of which is Arnold Böcklin’s series of “Isle of the Dead” paintings, the 1886 version is seen to the left). Greek General Pherides (Boris Karloff) and reporter Oliver Davis (Marc Cramer) row over to a cemetery to lay flowers on the grave of Pherides’ wife. They discover an empty coffin, and stumble upon the bizarre household presided over by Albrecht (Jason Robards, Sr.), an archaeologist who ordered peasants to go grave robbing. Now repentant, he lives on the island and offers shelter for any lonely wanderers. Then one of the guests dies of the plague, and Pherides and Davis are stuck quarantined inside, along with superstitious maid Kyra (Helen Thimig), consumptive wife Mary (Katherine Emery), her young nurse Thea (Ellen Drew) and stuffy husband Aubyn (Alan Napier).

Karloff’s Pherides is a clear influence on DiCaprio’s Det. Teddy Daniels. Both are violent men of authority who are driven to paranoia and madness, linked to romances past. As the days of confinement continue, Pherides falls under the spell of Madame Kyra, who accuses Thea of being a “vorvolaka”, an evil spirit who sucks the life out of her victims. Her evidence is Thea’s employer Mary, who has been slowly dying for years. Karloff’s eyes begin to bug out as Pherides clings to this fantasy as the true solution to their predicament – kill Thea and the “plague” will dissipate. Daniels is also imprisoned, but in an insane asylum, as he attempts to solve the mystery of a missing inmate during a biblical thunderstorm. DiCaprio plays it queasy and sweaty, while Karloff goes for a more operatic insanity, but they are both dangerous obsessives driven to insanity by the horror in their own souls.

Why I think Isle of the Dead is a scarier film, if not necessarily a more coherent one, is a result of Lewton’s visual understatement, with the aid of director Mark Robson and DP Jack MacKenzie. The film contains ultra low-key lighting, and when the supposed “vorvolaka” does appear, in a harrowing sequence of live burial, fleeting tulle garments, and tridents shoved into chests – it’s conveyed through terrifying glimpses.

It’s miraculous the film has the power it does, considering the difficulties during production. Karloff required spinal surgery after eight days of shooting, shutting down the production for months. In the interim, Lewton knocked off the delightful Body Snatcher, and when the shoot picked up again, the script was scrapped and re-made somewhat on the fly. No one on the production was happy with the finished product (future Lewton-ites aside), until perhaps the notices came rolling in, when James Agee called it “one of the best horror movies ever made.” It also affected a young Scorsese, who in an oft-recalled anecdote, remembers running out of the theater as a kid in sheer terror before the end, too scared to continue.

In any case Karloff and Lewton were a good match, as Karloff’s intro to the short story collection Tales of Terror attests:

The mightiest weapon of the terror tale is the power of suggestion – the skill to take the reader by means of that power into an atmosphere where even the incredible seems credible.

That could have been the Lewton team’s motto, and the two were to work again for the last time on Bedlam one year later. This film has an even closer relationship with Shutter Island, as it focuses on torturous treatment in an insane asylum, and the lead character’s incarceration. Lewton modeled the film off of plate 8 of William Hogarth’s series of paintings and engravings, “The Rake’s Progress”, which depicted subject Tom Rakewell’s final degradation at Bethlehem Hospital (aka Bedlam). Almost too slavish to Hogarth’s engraving, Lewton and director Mark Robson dissolve in and out of stills of the artwork before each new sequence, adding a static element to Lewton’s usually sinuous works. It’s a weird film in any context, though, with lead Nell Bowen (Anna Lee) a whitewashed reference to the Restoration England actress (and probable prostitute) Nell Gwyn. In this film, Nell is merely a kind of jester for the rich Lord Mortimer (Billy House), and tags along at the “loony” show George Sims (Karloff) mounts for the Lord’s pleasure. Sims runs the “Bedlam” insane asylum, allowing the inmates to rot in a barnyard atmosphere of scattered hay and the constant threat of death. Nell’s conscience is pricked by the earnest young Quaker Hannay (Richard Fraser), who sees a spark of pity in her.

The closest analogue to Karloff’s sadistic Sims in Shutter Island is probably Max Von Sydow’s malevlolent-seeming Dr. Naehring, who is intimated to have a Nazi past and moves with the same stiff bearing as Karloff’s schemer. The inmate population is the same however, a menagerie of terrifying grotesques, erudite madmen, and flailing arms in dimly lit, humid hallways. While Bedlam’s tone varies rather wildly from Restoration comedy to moralist grandstanding to atmospheric horror, it is never safe – and there are some agelessly wonderful bits, including the loony lawyer inmate who dreams of projecting his flip book onto a screen, only “It’s because of these pictures that I’m here.” That is, the cinema made him to madness. A truth Mr. Scorsese, Val Lewton and myself can certainly relate to.