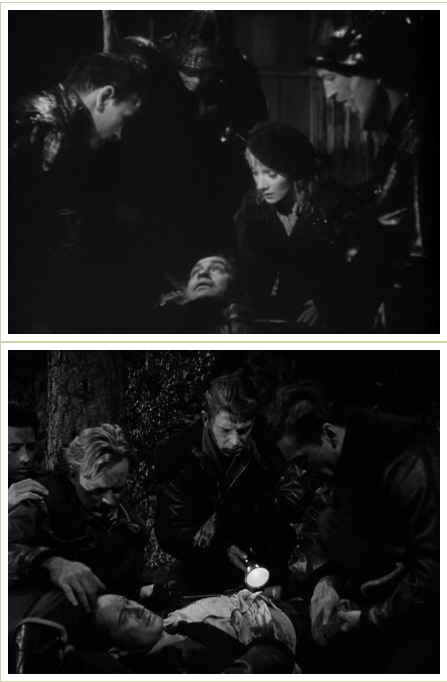 My  hopscotching education in Raoul Walsh skitters on this week, with five gut-punching thrillers. I’m jumping through his career haphazardly, watching whatever I can easily acquire. Last week led me from 1930 to 1955, but today I’m mired in the 1940s, thanks to the Warner Bros.-TCM box set, Errol Flynn Adventures (feel free to ignore this post if you think the TCM branding compromises my objectivity).  Along with Lewis Milestone’s Edge of Darkness, it includes the Walsh-directed Desperate Journey (1942), Northern Pursuit (1943), Uncertain Glory (1944) and Objective, Burma! (1945). I supplemented these with the Warner Archive disc of Manpower (1941).

The images at the top present two communities of wisecracking men, and Marlene Dietrich, sending off one of their own. They are from Manpower and Desperate Journey, two mournful studies of male camaraderie. Manpower takes the love triangle (and Edward G. Robinson) from Howard Hawks’ Tiger Shark (1932) and moves it from a fishing village to the road crew for a power company. It’s there that Robinson and buddy George Raft tell tall tales about their amorous accomplishments with fellow boozers Alan Hale, Ward Bond and a group of other grinning mugs. Walsh packs the frame with group shots, of leering, laughing and impulsive men. They gather in semi-circles to trade quips, and end the film in the same group formations saying their final goodbyes.

Marlene Dietrich spends the time in between wisecracks sullenly vamping around Raft and Robinson, in love with the former and married to the latter. She is arresting in the luxurious slowness of her movements, a Josef Von Sternberg-taught dreaminess that seems out of place in the blunt realism and speed of Walsh’s world. The men are in constant overdrive, scampering up transformers to fix high voltage lines in shots of dizzying verticality. Even their diner’s waiter gets amped up, translating their orders into his own intricate lingo. He changes “a bottle of sherry” into “grapes of wrath in a sport jacket”, directly addressing the camera. It is Walsh reveling in working class argot, which he also privileged in Me and My Gal, where J. Farrell MacDonald faced the camera. Instead of this unique (male) mastery, at her wedding Dietrich is framed in between the two fake power grids on the cake, pinned and isolated in her seat.  She is entirely alone. In the top-most photo, Dietrich’s face glows under Ernest Haller’s cinematography, but Robinson’s gaze is irrevocably drawn to Raft’s. It is, as Hawks referred to A Girl in Every Port, a love story between two men.

Raoul Walsh described Desperate Journey in his autobiography as, “a war comedy spiced with enough tragedy to give it reality.” He seems to have it backwards. Shot with low-key lighting by Bert Glennon, it is a relentlessly grim-looking film that its characters face with disconcerting joviality. Errol Flynn is the rakish Flight Lt. Terry Forbes, who crash lands in Germany with a crew that includes Officer Johnny Hammond (Ronald Reagan), Sgt. Kirk Edwards (Alan Hale) and Officer Jed Forest (Arthur Kennedy). They are the former Robin Hood’s merry band of saboteurs, with Hale playing Little John as he did next to Flynn in 1938. He spits seeds at a Nazi prison guard and bellows his way through the epic chase scene that makes up the rest of the film.

The banter that lit up Manpower seems brittle here, forced. It papers over the “1 in 10,000 chance we get out of here”, as Forbes admits. Officer Forest is the realist who refuses to participate in the general raillery. He is, he tells Forbes, just there to do a job and get out, which is later echoed by a female resistance fighter. The male group is no longer a community, but a collection of individuals trying to survive a war, and the film tracks Forbes’ growing realization of this fact.  He begins as a traditional Errol Flynn hero, dashing blithely into danger and improvising a way out. But larger stakes are on the line, and Forrest’s pragmatism begins to infect Forbes, and in turn alters Flynn’s persona in his next few films with Walsh.

In Northern Pursuit, set in the snow white Northwest Territories of Canada, Flynn operates his undercover operation completely alone. He still maintains the dapper moustache while infiltrating a Nazi spy ring, but he’s otherwise cold and calculated. The narrative doesn’t have the normal oomph of a Walsh production, getting bogged down in exposition and failing to take full advantage of the spectacular snow-capped landscapes. Walsh placed Northern and Uncertain Glory along with Background to Danger as “three quickies” he knocked off after completing Gentleman Jim (1941).

Uncertain Glory has more than a passing interest, however. Here Flynn plays his most disreputable character, a thief and murderer in wartime Paris unconcerned with the fate of his countrymen. Arrested by a famed inspector played by Paul Lukas, he’s headed for the guillotine. The Nazis plan on executing 100 Frenchman, however, if a resistance fighter does not turn himself in. Flynn, doomed regardless, proposes to impersonate the saboteur for the preferable death by rifle fire. Filmed in suffocating close-ups and two shots, it’s an earnest, troubled bit of propaganda, in which Flynn offers various shades of guilt and self-absorption. A quickie, but a haunting one.

The Warner Bros. set closes with the monumental Objective, Burma!, an implacably brutal war procedural in which Walsh unleashes all of his plastic gifts. It follows an Army platoon as they are marooned in Burma following a successful demolition job. Hemmed in by Japanese forces, there is no way for them to escape except for a long, grueling hike. With the great lensman James Wong Howe, Walsh is constantly panning the camera, a visual roll call for each soldier. They are given thumbnail characterizations through brief physical tics, whether it’s fastidious nail clipping or a penchant for napping. There are no longer any attempts at the egalitarian community of Manpower – Errol Flynn’s Captain Nelson is more of a haggard motivational speaker, cajoling and halfheartedly inspiring his exhausted men into action.

But character is the least of the film’s concerns, it is interested mainly with process, how a parachute jump is executed, or a supply drop is triangulated. In this emphasis on the mechanics of labor, it finds many points of contact with The Big Trail. The attention to operational detail recalls the intricate way in which the covered wagons were winched down a sheer cliff face or forded across a river in his 1930 Western.

The metronomic regularity of the camera movement emphasizes the men who have been lost from its countdown. The shots grow shorter as the group is picked off one by one, culminating in a night-time shootout where the half-starved, dug-in troops look like gaunt prairie dogs. This final battle takes place in darkness, where an inadvertant rustle can equal death. A dissipating flare offers a few seconds of traditional battle (a similar sequence is found in Johnnie To’s recent Vengeance, where the moonlight hides behind the clouds and shrouds the fight in darkness), but then the enemy returns to being myth and rumor. It is, as Jean-Pierre Coursodon writes, “an awesome achievement”, Walsh at the peak of his technical mastery, and at his most resignedly individualist.

Postscript: In an unnecessary aside, I have to throw in one of my favorite quotes from Walsh’s unreliable but hugely entertaining autobiography, Each Man In His Time. Hanging out with Errol Flynn on the press tour for Objective, Burma!, Walsh relates that, “[Flynn] once told me that when he bought perfume for a present, he always inquired for Chanel number 10. ‘I don’t like my women to be only half sure.’”