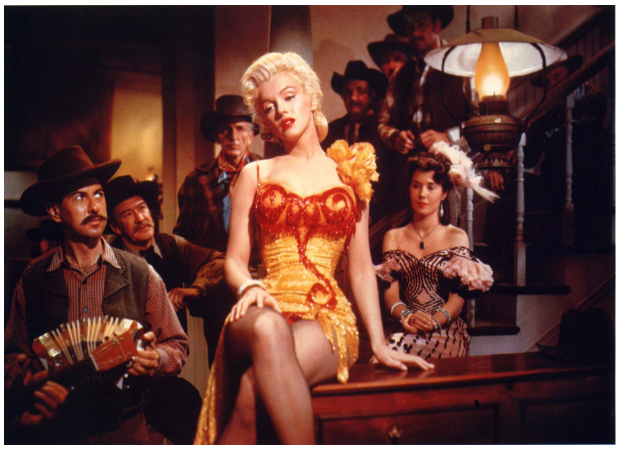 In the numerous attempts to capitalize on the 50th anniversary of Marilyn Monroe’s tragic death, 20th Century Fox has made the most welcome one, releasing impeccably restored editions of seven of her films in the “Forever Marilyn” Blu-Ray box set. Also available individually, these discs are a striking reminder that Monroe was not simply a mass-produced fetish toy, but an idiosyncratic artist who keenly played off of, and frequently subverted, the dumb-blonde characters she was saddled with. It includes Gentlemen Prefer Blondes, How To Marry A Millionaire, River of No Return, There’s No Business Like Show Business, The Seven Year Itch, Some Like It Hot and The Misfits. While Gentlemen Prefer Blondes remains an ebulliently entertaining treatise on female friendship, the revelation for me was Otto Preminger’s River of No Return (1954), a rather melancholy Western (with the saddest theme song in history), in which she plays her woman of questionable virtue with a daring opacity, causing Darryl Zanuck to demand re-shoots to clarify her character’s motivations.

River of No Return was originally conceived by screenwriter Louis Lantz as a Western remake of Vittorio De Sica’s Bicycle Thieves. It concerns a man, Matt Calder (Robert Mitchum) whose horse and gun are stolen by gambler Harry Weston (Rory Calhoun). Unable to work on or defend his farm, Calder and his son Mark (Tommy Rettig) search the dangerous countryside for the thief. As Chris Fujiwara reports in his meticulously researched critical biography of Preminger, The World And Its Double, Lettig’s treatment was heavily revised by Frank Fenton, brought in by young Fox producer Stanley Rubin. They fleshed out Calder’s backstory, making him an ex-con recently released from prison on a murder charge. Weston was also given a saloon singer fiancee, Kay, to be played by Monroe. After the theft, Kay is embarrassed by Weston’s actions and stays behind with Matt and Mark,  but her ultimate loyalties are left ambiguously undefined.

Fox executive Darryl Zanuck intended the film to be a garish spectacle that would show off Monroe and the new CinemaScope process, writing in a memo that he wanted it to “stand an audience on its ear.” Otto Preminger did not entirely deliver the thrills Zanuck sought, so Jean Negulesco was brought on to film reshoots, including the sexually suggestive scenes in which Mitchum massages, and later violently wrestles with, Monroe.

Preminger was brought late into the production, after the screenplay and much of the cast were finalized. Used to being producer/director on his films, and having just finished The Moon Is Blue, doing work for hire was a new and fraught experience for him. It was also the first film that he shot in CinemaScope, which he adapted to with a remarkable ease. Working with cinematographer Joseph La Shelle, Preminger composed images for the widescreen frame, which was perfect for capturing the horizontal lines of the pseudonymous river (shot in Alberta, Canada). He also instinctively understood that the wider frame was inimical to quick pans and editing, so he often uses depth to stage multiple actions in one shot. At the time Andre Bazin wrote that River of No Return was an exemplar of CinemaScope filmmaking, that it was one of the first films in which “the format really added something important to the mise en scene.”

This can be seen to an offhandedly brilliant effect in an early shot where Mitchum is strolling through a gold rush town, interrogating a priest about the whereabouts of his son, whom he is picking up. The priest laments that he came West as a missionary to convert Native Americans, but that he thinks white folk need him more now. Gold fever has corrupted his town. In the background Preminger presents nature as another force luring people into the muck. There is a carriage fording the river behind Mitchum, loaded up with women. It gets stuck in the mud,  and one of the ladies tumbles into the water before it reaches shore. This is a comic variation on the dangers the river will later present to Calder and to Kay. Background is comedy, foreground is tragedy.

As easily as Preminger adapted to CinemaScope, the same can’t be said regarding his relationship with Marilyn Monroe, who brought along her very vocal acting coach Natasha Lytess. Fujiwara details Preminger’s growing irritation with Lytess’ constant interruptions, until he finally banned her from the set. She would later return due to Zanuck’s intervention. But regardless of the tension off the set, Monroe is teasingly enigmatic in the film, emphasizing Kay as a performer. She appears warm toward Mark, but there is a coldness in her tone that implies it could be an act, as she is still sworn to marry Weston. She is the perfect foil for Mitchum’s brooding introvert – who repeatedly tells Kay and his son that they are likely to die on their journey. They are like two stubborn mules who kick each other enough until they realize they both like it.

Zanuck did not approve of the ambiguous nature of Kay and Calder’s motivations, writing in a memo that “our picture is inarticulate. We have got to stop guessing about these relationships. Once and for all, we want to lay it on the line so there can be no doubt or confusion as to what our people mean and how they feel.” Three new scenes were shot, including the two sexually suggestive ones previously mentioned, and another with Monroe and Rory Calhoun that would clarify their intent to marry.

Regardless of these additions, Preminger’s film remains intriguingly opaque, the characters’ moral reversals seemingly coming with the wind more than from some inner will. In the glorious CinemaScope landscapes, it is the world that seems to determine the action, and not the other way around, as Calder and Kay are tossed to and fro along the riverbank. It is even the river that provides the most famous symbolic moment in the film – when Kay’s suitcase escapes in the water as Weston carries her to the shore, and onto Calder’s farm. Her final ties to civilization are carried away by the current, and Mitchum’s (gun and horse) are forcibly removed by Weston. They are forced to find a new life, re-shaped and re-directed by the river’s ceaseless flow.