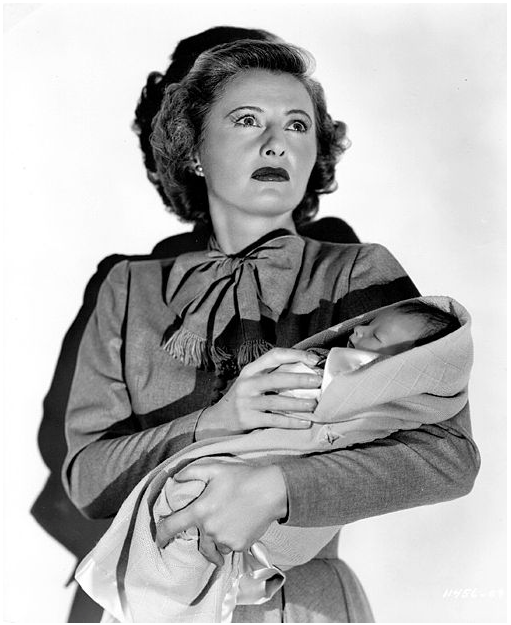 Onscreen, Barbara Stanwyck was rarely the nurturing type. She became an icon because of her persona of fearsome independence, her justifiably shameless arrogance next to godliness. So it’s jolting to investigate the byways of her career, in which she played off type, including her elegiac performance in Mitchell Leisen’s noir, No Man of Her Own (released on DVD today by Olive Films). Playing the vulnerable and doomed Helen Ferguson, Stanwyck exhibits a touching passivity in the face of a world continually conspiring against her.

The movie was based on a Cornell Woolrich short story, “They Call Me Patrice”, that he published under the pseudonym William Irish in Today’s Woman magazine. He later expanded it into a novel entitled I Married A Dead Man. Optioned by Paramount, it was adapted into a script by Sally Benson. Leisen later claimed he rejected Benson’s version, and wrote an entirely new screenplay himself, with help from Catherine Turney. Benson and Turney receive the only on-screen credit, since Leisen was not a member of the Screen Writer’s Guild. In the American Film Institute’s notes on the film, it is stated that the PCA refused to approve the script, as supposedly Helen was a prostitute in the original. It would only be passed if Leisen agreed to kill her off at the end, to pay for her “sin”, so instead any reference to her streetwalking was eliminated.

Helen Ferguson is pregnant and penniless after getting dumped by her playboy boyfriend, Stephen (Lyle Bettger), his parting gift a train ticket out of town. The train crashes, and in the confused aftermath Helen is identified as Patrice Harkness, a pregnant newlywed who died in the disaster with her husband. Desperate to start a new life for her child, Helen pretends to be Patrice, whom the Harkness family had never met in person. She passes off her ignorance as trauma from the crash, which raises the suspicion of Bill Harkness (John Lund), Patrice’s brother-in-law. When Stephen reappears and begins blackmailing Helen, she will have to choose between revealing the truth – or remain forever in his oily grip.

Stanwyck exudes helplessness and inertia from the opening frames, as she speaks in resigned tones in a voice-over, with the camera slowly dollying forward toward an idyllic home. “Summer nights are pleasant in Caulfield… But not for us. Not for us.” The camera continues to track through the interior of the home, its progress slow and funereal, the empty, shadowed hallways as quiet as a mausoleum. In the first glimpse of human life, Stanwyck stills her face into the soullessness of a wax figure, while Bill is sweatily reading Thomas Wolfe’s Look Homeward, Angel. Stanwyck: “I love him, and he loves me. I know he does. But someday he’ll pack and leave.” She says these lines with calm resignation, accepting her role as the plaything of fate, her tragedy as destiny.

To initiate the flashback which will describe how she came to this state, Leisen blacks out the screen except for her tired eyes. Stanwyck is always on the edge of exhaustion, moving slowly and deliberately, approaching everything with circumspect weariness. Leisen emphasizes this with the dreamy unreality of his style, which truncates scenes with enigmatic ellipsis and pumps up background noise to unreal levels, the world constantly having its say over the characters in its sway, the rattle of the train tracks insinuating themselves into Helen’s skull.

With the crash, what had been a tragedy turns also to nightmare, with Leisen’s imagery becoming more unhinged. The camera twirls 360 degrees upon the smash-up,  enters  Helen’s unconscious POV as she is anesthesized before giving birth, from which she will awake as Patrice, and a rich woman. Bill tells her, “You were born the day I met you”, but as what? For Helen/Patrice, the mask continually slips, and it’s unclear whether she’d want either face anymore, one a poor wastrel and the other an anxiety-ridden liar. Stanwyck’s passivity shades into nihilism, the turn coming when she realizes that her only way out of her predicament is cold-blooded murder, which she accepts with equanimity. The too-happy ending absolves her of these crimes, but the glint in Stanywck’s eye is far more troubling than what the Production Code Administration presumably censored.

In his New York Times review, the reliably condescending Bosley Crowther said that, “This sort of female agonizing, in which morals are irresponsibly confused for the sake of effect, makes diversion for none but the suckers, we feel sure.” Count me among the suckers. It is a profoundly unsettling film, and proof positive that Stanwyck could play crumbling facades as well as gleaming monuments.