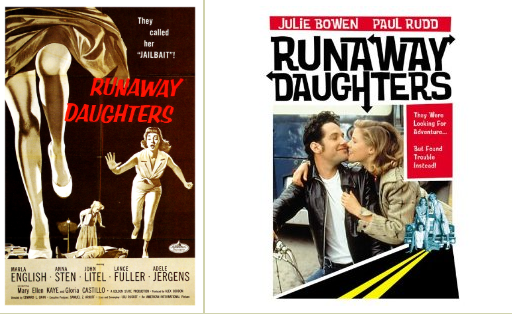 In one of the stranger experiments in cable television history, Showtime’s 1994 Rebel Highway series commissioned ten filmmakers to remake a 1950s exploitation movie. It was the brainchild of Lou Arkoff (the son of American International Pictures founder Samuel Z. Arkoff) and Debra Hill (producer of Halloween). They gave directors $ 1.3 million and a 12 day shooting schedule, to roughly approximate the original shooting conditions (modified for inflation). Unlike the ’50s cheapies, though, they were given final cut, and could choose their own screenwriter, editor and director of photography. This proved irresistible to the (mostly) impressive list of talents who signed on: Robert Rodriguez (Machete), John McNaughton (Wild Things), Mary Lambert (Pet Sematary), Allan Arkush (Rock ‘N’ Roll High School), Joe Dante (Gremlins), Jonathan Kaplan (The Accused), John Milius (Conan the Barbarian), William Friedkin (The Exorcist), Ralph Bakshi (Fritz the Cat) and Uli Edel (The Baader Meinhof Complex).

All of the filmmakers, except for Rodriguez, were old enough to have lived through the era of the film they remade, engaging the aesthetics and politics of the originals in strikingly different ways, alternating between affection and parody often in the same film. Since its original airing, the series has completely disappeared from cultural memory, but Netflix Watch Instantly, that haphazard repository of moving image detritus, is now streaming every entry, and it’s well worth sampling the project’s eccentric film-historical time travel. Below, some thoughts on my favorites.

Joe Dante’s Runaway Daughters, an adaptation of Edward L. Cahn’s 1956 AIP production, is one of the few entries to completely stand on its own as a feature. It is a companion piece to Matinee, Dante’s loving evocation of a 1950s movie-huckster, modeled on William Castle, that he made the previous year. Both films were written by Charlie Haas, and share a tone of gentle satire, about the paranoia brought on by the threat of nuclear war and the space race, respectively. Runaway Daughters follows three high school girlfriends who chase down the no-good boy who loved and left.  Working class Holly (Mary Nicholson) thinks she’s pregnant, and is convinced by rich girl Angie (Julie Bowen from Modern Family) and middle-class Laura (Jenny Lewis, who later formed indie-rock band Rilo Kiley) to track the dog down. So they steal a car and hit the road, intercepting the cad before he signs up for the Navy.

Dante opens the film with an irony-drenched  found footage montage set to “Let the Good Times Roll”, from a jubilant Eisenhower and Nixon, to the NAACP hung in effigy, and closing with the repressed sexual longings of I Was a Teenage Werewolf (1957), the title character getting hairy while watching a stretching gymnast. The longing on-screen enters the narrative, as the trio of not-so-repressed girls is watching Werewolf at a drive-in, necking with impunity and ignoring the metaphors on screen. One of the neckees is Paul Rudd in one of his earliest roles, playing Angie’s bad boy squeeze, Jimmy Rusoff (named after the original screenwriter, Lou Rusoff). Dante gifts Rudd with the catch phrase from Speed Crazy (1959, a major part of Dante’s mash-up Movie Orgy (’68)), “Don’t crowd me!”, which Rudd dishes with appropriate petulance to his greasy gearhead Dad (played against type by Fabian, a late ’50s teen idol).

From this opening scene, it’s clear the girls are more mature than the films representing them, although the Red Menace makes them shaky just like everyone else. Bob (Chris Young) gets in Holly’s pants by waxing poetic over Sputnik, which has just launched into space. For the rest of the movie, though, the phalluses fail. On their journey, the girls run into drunk cops and a gang of flaccid anti-commies, the only sympathetic voice brought by an uncredited cameo from Cathy Moriarty. The lone competent male is played by Dante-axiom Dick Miller, a crusty private detective with a reflexive disdain of the young and their newfangled perversions. He asks the girls’ parents if they ask their kids “about the strange night world of twisted kicks, of weird rituals and equipment? Of whips and chains and rubber balls and dildos and handcuffs?” In this world, it is clear the ladies have to take the world into their own hands, and so they do.

Robert Rodriguez’s Roadracers (adapted from the immortal Arthur Swerdloff version of 1959) lacks any of the historical identifiers of Runaway Daughters, taking place completely in Hollywoodland. The most stylized entry in the series, Rodriguez has no interest in interrogating the period, only in refining his style, which at this point was still potently kinetic, coming right after El Mariachi. It stars David Arquette as cynical greaser Dude (in an appropriately mannered performance), who cruises around town with his girl Donna (Salma Hayek) and his fidgety buddy Nixer (John Hawkes). The overriding mood is provided by Invasion of the Body Snatchers, which is playing at the local cinema, and which Nixer returns to ritualistically. Dude doesn’t have to see it to know his town has been co-opted by evil. He’s chased by a sadistic cop (William Sadler) and his moderately sadistic son (Jason Wiles). Rodriguez institutes a rhythmic editing style, set up in the opening when he intercuts a rockabilly band and a car chase, matching the downbeat with screeching turns. This tempo is maintained throughout, accessorized by swaggering slow-motion and low-angle anti-hero close-ups. As Dude grows more certain of the town’s rot, the images get more delirious and the action more violent, ending in a farrago of gleeful self-annihilation.

The most jaw-dropping part of the series is provided by the pen of Sam Fuller, who with his wife Christa provided the script for Girls in Prison, which was directed by John McNaughton (adapted from the 1956 Edward L. Cahn film). An overheated women-in-chains movie, it is graced by an opening of transcendent pulp paranoia. It  sets up the back-stories of the eponymous girls, in three bloody tales: a red-baiting newscaster gets bludgeoned to death with a hammer; a budding screenwriter (Ione Skye) mounts an Off-Broadway play, “The Witch Hunt”, that drives her father insane and leads her to savage a bigot with a broken bottle; and a budding country star (Missy Crider) is framed for the brutal stabbing of a abusive producer. Filmed with canted angles and looming shadows, it’s a wild and terrifying hallucination of a society spiked with a insatiable need for vengeance. It is impossible for the rest of the film to live up to this fever dream, but it goes through the rest of dramatic motions with enough pep and smarminess (including a deliciously vampy turn from Anne Heche) to make it a worthwhile sit.

Shake, Rattle and Rock is a joyful and reflective evocation of 50s rock musicals, this one a remake of the ’56 Edward L. Cahn movie about a town that tries to ban Rock ‘n’ Roll (for more on Cahn, check out Dave Kehr’s profile in a forthcoming Film Comment).  Directed by Allan Arkush in bright pastels and a wall-to-wall soundtrack of pop hits (from Fats Domino to Eddie Cochran), it is the most culturally precise movie in the series, along with Runaway Daughters. Renee Zellweger takes the lead as the rock aficionado whose parents just don’t understand. She first appears as a bouncing blur, singing along to Little Richard’s “The Girl Can’t Help It” (also used in the great Frank Tashlin film of the same name) in her bedroom, her addiction not outed to her parents until she appears dancing again on a local American Bandstand-type TV show, hosted by Danny Klay (Howie Mandel). Once Zellweger’s mom (Nora Dunn) sees this horrible gyrating, she gathers her sewing circle (including P.J. Soles from Rock ‘n’ Roll High School and a wonderfully bitchy Mary Woronov), to shut down the show and ban the music. There is also a subplot involving a black acapella group, “The Sirens”, who are trying to break through the town’s color barrier and hit it big, and who Zellweger teams up with to protect the town from her mom’s crew.

Arkush elicits effortlessly appealing performance from Zellweger, a perky ball of cashmere with a fierce sense of her personal rights. The director also has a light, and very funny, ironic touch in presenting the parents’ retrograde attitudes, but intimates that these comical buffoons are not a plot point to be overcome but the avatars of an entire culture. Instead of the expected ending of a bridged age-gap, it concludes on a note of muted despair, with freedom reluctantly deferred. It is unexpectedly the most political film of the series, robbing its characters of the young people’s bill-of-rights stated by Florine in Jean-Luc Godard’s Film Socialisme: “To be twenty years old, to be right, to keep hope, to be right when your government is wrong, to learn to see before learning to read.” For Zellweger, there is nothing to see and nothing to read, her only hope an escape to parts unknown.

For more information, please read Jonathan Rosenbaum’s review of the series, in which he compares it to the French one produced by Arte, Tous les garcons et les filles de leur age.