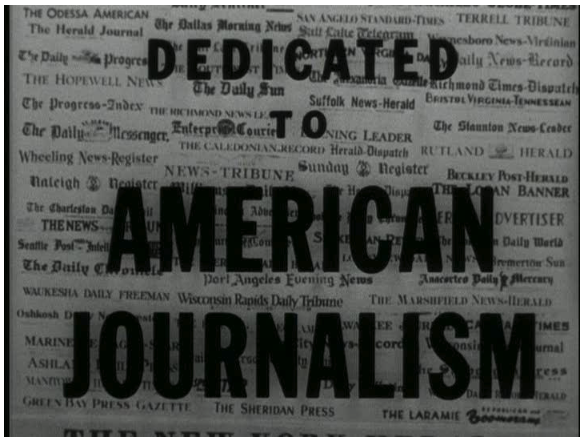 One of Sam Fuller’s most personal films, Park Row (1952), has been released on DVD through MGM’s burn-on-demand service, the “Limited Edition Collection” (available through Amazon and other retailers). Inspired by his time as a copy-boy for Hearst’s New York Journal and as a crime reporter for the New York Graphic, it is an impassioned paean to American journalism, opening with a scroll of the 1,772 active daily papers at the time (in 2009 the numbers were down to 1,387).  I can confirm that the listed Waukesha Daily Freeman is still running, with reasonable subscription rates. Fuller’s artistic temperament was formed in his ink-stained years, as he wanted his films to have the visceral impact and clarity of a 100 point size headline. Park Row is his gift to the business that made him. MGM’s DVD is presented in a solid if unspectacular transfer, with strong contrast. It includes a trailer.

In his raucously entertaining autobiography A Third Face, Fuller writes:

In 1952, I got an opportunity to make a film about the origins of American journalism and the passion for a free press. Park Row was the only film I’d ever produce with my own dough. But I had to make it, if for no other reason than to pay homage to the memories of my youth on that street I loved.

And an homage it is, a sweet love letter to the profession that gave him his start. It stars  Gene Evans and his clipped cadences as Phineas Mitchell, a born newsman floundering as a writer for the New York Star. When an enterprising printer pitches him on editing a new paper, The Globe is born, a muckraking start-up published on butcher paper that electrifies the city. Mitchell quickly riles up the Star’s owner, Charity Hackett (Mary Welch), and a circulation war flares and turns violent.

As Fuller notes, he used his own money to produce the film. He originally wanted to make it after his success with The Steel Helmet (1951), but Darryl Zanuck nixed the idea, since Richard Brooks was already directing a newspaper picture for 20th Century Fox, Deadline-USA (1952). Instead, he made another remarkable Korean War film in Fixed Bayonets. Fuller came back to Zanuck again with Park Row, and this time Zanuck agreed, but only if Fuller would turn it into a CinemaScope musical starring Gregory Peck and Susan Hayward. So he “decided that the only way to make Park Row was to put up my own dough and produce it myself. Two hundred grand, to be exact. To hell with Zanuck and Fox! Fuck the entire studio system!”

With limited funds, the film takes place entirely on one small city street set, that included the two newspaper offices and a bar. Every shot feels insular and cramped, with Fuller grouping his small cast in tight formations in the foreground of the frame. He doesn’t have the space to execute many tracking shots (although there are a few doozies, including a brawl that ends at the feet of Benjamin Franklin), which gives the film an unusual tension. The dialogue crackles but the characters are static, prompting Manny Farber to complain about its, “absence of fluidity – two huge faces usually dominate the screen.” While there are more group shots than Farber remembers, it is definitely a movie of close-ups, Fuller’s attempt inscribe these invented faces into history – they become monuments to his memory of being a newsman. This is established in the opening of the film with shots of three statues resting on the Park Row street set: of Gutenberg, Benjamin Franklin and Horace Greeley.

His personal investment becomes most touching in the character of  Rusty (Dee Pollock), the young kid who Phineas hires to become the “printer’s devil”, who has to re-organize the used typefaces. He is clearly the incarnation of Fuller when he was at the Journal, soaking up the atmosphere and strange argot (guideline, key-line, point, pull, stick, stone) that holds the mystery of an undiscovered country. There is a lot of talk about journalistic ethics, but the first story the Globe publishes is one they help construct. Phineas tells Bowery Street legend Steve Brodie that he’ll print a story about him if he jumps off the Brooklyn Bridge. What starts as a joke becomes front page news as Brodie and Phineas soon see the publicity potential in such a stunt. The story fuels the Globe’s opening week surge, and renders Phineas’ ethical issues at the Star moot. Clearly his biggest complaint was not ethics but entertainment. The Star’s corruption had simply become boring, and Phineas simply wanted to bring ballyhoo back to the printed page.

Fuller adapted some real events into the story to fuel Phineas’ Globe. Steve Brodie was a real Bowery legend, who became famous for jumping off the Brooklyn Bridge, even if it is now likely to be considered a hoax. In Luc Sante’s history of NYC shysters, Low Life, he writes that Brodie “had inconspicuous beginnings as a newsboy and bootblack, staking out the Manhattan end of the Brooklyn Bridge as his territory immediately after the 1883 opening. A few years later he began announcing to friends that, as a sort of dare, he planned to jump off the bridge. One of his friends was a printer named Tom Brennan, who had numerous connections in the newspaper world, and so word spread fast.” The line between “news” and “stories” is immediately blurred in Park Row, with Phineas becoming the hero over Charity only because his stories are more entertaining, if not more true.

It’s interesting to compare Fuller’s depiction of Brodie with Raoul Walsh’s, who filmed a version of the story with The Bowery in 1933. There is a difference in budget and approach. Fuller is working with no money, using the threadbare spaces to invest his film with a sense of monumentality, and a highly conscious nostalgia. Walsh was working with a big studio budget, and his frames are dense with people and action, evoking a sense of history-as-present. Even the basic conversational two-shot has drunkards and con-men gyrating in the background (he used his recollections of the real Bowery to construct his scenes, where he shot for Regeneration in 1915). These stylistic choices were made possible by their respective budgets, but they also fit each directors’ interests. Fuller is an idea man who uses images as rhythmic blunt force objects to get his concept across – working from the outside-in. Walsh prefers to go inside-out, building incidents and bits of business until patterns emerge of their own accord, a crafter of moments. Watch them both.