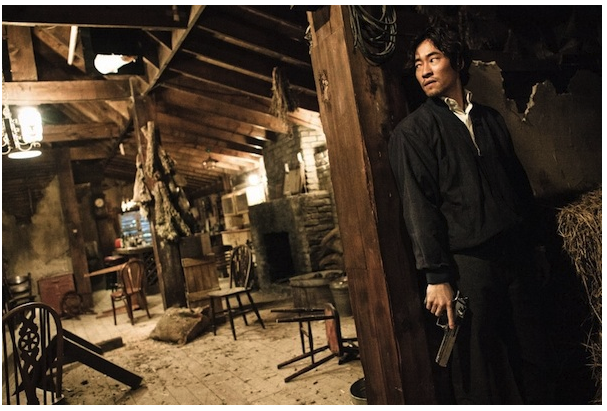 While the first quarter of the year has generally been a quiet time for Hollywood’s coffers, the rest of the world has been packing them in to their local multiplexes. Two of the bigger recent international successes are receiving limited U.S. releases, China’s Lost in Thailand (2012) and Korea’s The Berlin File (2013). Lost in Thailand has already become the highest grossing film in China’s history after only two months in release. An amiable odd couple road movie made for a reported $4.8 million, it has made an astounding $215 million domestically, and snuck into a NYC theater in time for the Chinese New Year. The Berlin File was more groomed for success, with a relatively large $10 million funding four big stars in an international spy thriller, with the talented director Ryoo Seung-wan (The Unjust) at the helm. It had the third highest opening weekend on record in Korea (from 2/1 – 2/3), and arrives stateside in a limited release this Friday.

Ryoo has ranged through many genres, from the male weepie Crying Fist (2005) to the amped up action of City of Violence (2006) to the savage corruption drama The Unjust (2010), but he applies his sharp social criticism and pulsating rhythmic sense to all of them.  His characters are either economically disadvantaged or on the make, the action arising from their guilt or underclass rage. Ryoo wrote and directed The Berlin File, but it’s the first that feels like a purely commercial venture – an impersonal technical exercise set to capitalize on the success of the first Korean spy blockbuster, Shiri (1999). It’s a cold war nostalgia piece that swaps the U.S. and Russia for South and North Korea (Ryoo too clearly tips his hand with a close-up of a John le Carre novel). Jong-seong (Ha Jung-woo) is a North Korean agent in Berlin who gets stranded in an arms deal gone bad. Suspected of being a double agent, DPRK spook Myung-soo  (the director’s brother Ryoo Seung-bum) is sent to test Jong-seong and his wife’s loyalty.  All are under investigation by South Korean intelligence chief Jin-soo (Han Suk-kyu), who tries to puzzle out their movements with the help of the CIA.

Ryoo Seung-wan’s  script gets bogged down in plot mechanic minutiae, with almost an hour of stop-start exposition before the nut of the conflict becomes clear. Part of the problem is in trying to make the film English friendly. His stars are visibly strained when they are asked to speak the language, and the Anglo actors he has hired to play Mossad and CIA agents are a couple of smirking stiffs. This throws off the ping-pong beats of his usual scene-building, and doesn’t pick up again until the movie gets monolingual. Then Ryoo is able to display his prodigious talent – including a crisply shot  apartment shootout that ends with Jong-seong wrapped up in electrical cords and bouncing through space like a Cirque du Soleil acrobat. Ha plays him with blank professionalism, trained within an inch of his life, while Ryoo Seung-bum gets to have all the fun as grinning sociopath Myung-soo, gleefully torturing his way through Berlin. This is no jingoistic anti-North Korean job though, since Ryoo again displays his disgust for his own government as well, the South a craven profit machine, betraying its principles as quickly as any DPRK agent. With tensions at the DMZ ratcheting up due to the reported North Korean nuclear test, though, it will be interesting to see if the film gets any blowback.

Lost in Thailand has no such claim to current events, although it has become something of an event in itself. It re-teams  the comedy duo of Xu Zheng and Wang Baoqiang from their 2010 hit Lost On Journey. Xu is the white-collar straight man, an impeccably groomed account manager for a scientific research firm, who is desperate to run the account for their new “petroleum enhancer”. In order to close the deal, he has to track down his boss, who is on retreat in Thailand. With no first-class seats available, he is forced to fly in coach, where he meets Wang. With his shaggy bowl cut, disturbingly childlike naivete and fighting skill, Wang is an unholy mix of Jerry Lewis and Mo from the Three Stooges. Xu and Wang have hit on a team up of high and low class that clearly appeals to vast swathes of the Chinese population, comparable to Dean Martin and Jerry Lewis’ appeal in the 40s and 50s. Although the film has been frequently compared to The Hangover, there is little of that film’s macho gross-out.

Like Lewis, Wang is a force of chaos, constantly destroying Xu’s plans, usually through his ignorance of technology. He pours water on a computer, tosses a flash drive out a window, and deletes the map to the boss’s temple. He’s a retrograde force, one the film condescendingly positions to be pitied, although of course his simple truths have much to teach the work-obsessed Xu. The film is much more fun when Wang is destroying than when Xu is learning, whether it’s giving a literally backbreaking massage or kicking gangsters in the face, but the film covers all its demographic bases, so we get maudlin scenes of a weepy Xu calling his estranged wife as well. Despite all the cliches, Xu and Wang have a prickly income inequality love-hate rapport that generates enough laughs to make me want to see more. And with those grosses, they’ll have plenty of opportunities to work on their schtick.