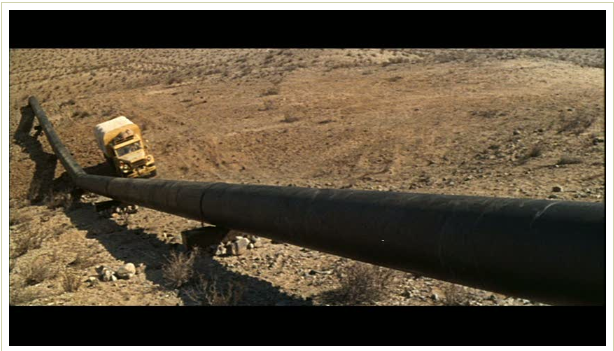 The wheezing, rickety looking vehicle you see above, silently mocked by the parallel oil pipeline, is desperately straining up the incline, hoping to reach the space outside the CinemaScope frame. Why the hurry? Because they’re trying to….Escape From Zahrain! This 1962 Paramount adventure film is being released on DVD by Olive Films on December 7th, and it delivers the ragtag-group-on-the-run goods. At age 51, it was director Ronald Neame’s first Hollywood production, after a lifetime in the British system.

An assistant cameraman on Hitchcock’s Blackmail (1929), he became a highly sought after cinematographer for 12 years, and worked frequently for David Lean (This Happy Breed, Blithe Spirit). After moving to producing duties on Lean’s Great Expectations and Oliver Twist, he segued into directing with the 1957 relationship drama Windom’s Way (1957). It wasn’t until the success of Tunes of Glory (1960), and its Oscar nomination for best adapted screenplay, that Paramount came calling. He’s mainly remembered now for The Poseidon Adventure‘s disaster theatrics, but his career seems to warrant further investigation. I’m sure there are readers out there more well-versed in Neame’s work, so please send recommendations my way.

The plot of Escape from Zahrain essentially re-locates Stagecoach to a made up Middle Eastern country, throwing together conflicting personalities into a tight space. Sharif (Yul Brynner) is the stoic imprisoned leader of a revolutionary group in Zahrain advocating the expulsion of the corrupt U.S. oil company. A student cell led by Ahmed (Sal Mineo) leads a bold jail-break scheme, springing Sharif as he is being transferred to another city. As they race away from government thugs to the border, they have to deal with the other inmates in Sharif’s car. Huston (Warden) is an arrogant American embezzler, while Tahar (Anthony Caruso) is a murderous, shifty local. When this suspicious group needs a new ride, they kidnap Laila (Madlyn Rhue) and her emergency vehicle in their rumble towards freedom.

Neame utilizes the CinemaScope frame to alternate sweaty cab interiors with epic long shots of desert and horizon, often bisected by jutting diagonals. These graphically unbalanced shots echo the shifting power relationship between the cranky travelers. Sharif stares bullets into the windshield while everyone else jockeys for position. Huston never shuts up but has his uses fixing cars, while Ahmed’s idealism smacks up against Laila’s humanist pragmatism, and Tahar is just an asshole. The actors are relaxed within the streamlined narrative, with Jack Warden especially resourceful as the cynical ugly American. The rest of the actors compare chest hair (Sal Mineo finishes last, James Mason wins in a landslide in his hilarious cameo), while Madlyn Rhue is appropriately confused. With taut storytelling, companionable characters and the expressive images, it’s a diverting gem from the waning days of the studio system.

He Who Gets Slapped (1924) marks another Hollywood debut, this time of the great Swedish director Victor Sjostrom, now on DVD from the Warner Archive (it’s also the first film produced under the MGM banner, and so the first to use Leo the Lion). Sjostrom’s Name the Man (1924) might have been filmed ahead of it, but Slapped beat it to screens. The film is in pretty rough shape, with shaking frames, heavy scratches and an overall softness, but at least it’s better than the version that’s streaming at Google Video.

Sjostrom was one of the pioneers in developing a language for narrative cinema. His Ingeborg Holm(1913) is a powerful melodrama about a family left destitute by the death of the father. But it’s important not just for its social conscience, but for the masterful way in which Sjostrom choreographs his actors in the frame, shifting the centers of action. David Bordwell has a brilliant post on this at his blog. He continued to have a brilliant career in Sweden, churning out outdoor adventures like The Outlaw and his Wife (1918) as well as the supernatural fable of The Phantom Carriage (1921), probably his most famous work. There he played with camera tricks, including the most complex double exposures seen up until that point, which probably caught the eye of MGM.

His visual experiments continue in He Who Gets Slapped, another monstrous melodrama starring Lon Cheney, a year after The Hunchback of Notre Dame. It’s adapted from a Russian play by Leonid Andreyev of the same name, about a brilliant unknown scientist whose discoveries (and girlfriend) are stolen by an evil Baron. As a cruel joke, the scientist, named Paul Beaumont in the film (Chaney), becomes a clown in order to laugh at his own bitter destiny. Soon he falls in love with the new acrobat Consuelo (Norma Shearer), who is also courted by the Baron who had betrayed him all those years before.

It’s scaled to the same tragic clown heights as Pagliacci, both protagonists subject to their own humiliating emasculation. But the grand emotions of the opera are not scaled down for the screen, and what is emotional when sung by a virtuoso becomes caricature and stereotyped when filmed as drama. The movie is populated with inert grotesques, with no shades of ambiguity or plausible motivation. Sjostrom imaginatively amps up his visual presentation, patterning large crowds as faceless mobs of judgment (as Fritz Lang would do in M a few years later), but they are illustrating a story not worthy of his images. Despite this, Chaney manages a superb performance of a masked, bubbling breakdown, the only human element amid the burlesque, and one can see why it was one of his favorite performances, and one he recalls for his role in Laugh, Clown Laugh (1928).

Sjostrom would go on to make the magnificent The Wind (1928), another outrageous fugitive from home video. Also an MGM title, hopefully the Warner Archive can add it to their release schedule, and fill in another gap in the career of one of the great unsung directors in film history.