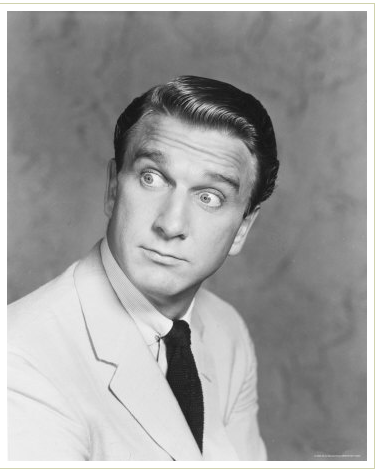 Leslie Nielsen always played off the beat. Before he delivered a punchline, there was a hitch, a pause, a dumbfounded look off-screen – that made him a devastatingly funny actor. When he finally delivered the deadpan kicker it was in a sonorous tenor drained of emotion, a hollow thud of obliviousness. With his granite-jawed, silver-haired good looks he could say any absurdity with a straight face and a straighter vocal tone, and in collaboration with non-sequitur artists like the Zucker brothers and Jim Abrahams, he created some of the most ingratiating buffoons in film history. And this after a long and overshadowed career as a genial and arrogant leading man on television.  Mr. Leslie Nielsen passed away yesterday at the age of 84, while being treated for pneumonia.

Frank Drebin (The Naked Gun) and Dr. Rumack (Airplane!) are the twin monuments of my youth. Their commitment to ignoring the outside world is so intense it is almost saintly, and I worshiped them with religious fervor. Without the distractions of other human beings, Drebin and Rumack misinterpret every conversation, translating it through their simple-minded narcissism. In The Naked Gun, when Ricardo Montalban offers him a cigar, Drebin takes it as a personal question of ancestry: “-Cuban? -Ah no. Dutch-Irish. My father was from Wales.” Nielsen clips off the words quickly, with the blithe assurance that every query concerns himself. The speed in his response belies a majestic false modesty: everything is about him, but he’ll rush through it to prove he doesn’t care.

Then there’s the legendary “Don’t call me Shirley” bit from Airplane, which results from a similar misinterpretation of an innocent turn of phrase, “surely” to “Shirley”, from the descriptive to the personal. And what makes the line canonical is Nielsen’s stone-faced line-reading, an immobile expressionless mask of  vapidity. It’s hard work to be that straight, and at NPR Marc Hirsh quotes Nielsen’s Saturday Night Live monologue from 1989 to prove the point:

Nielsen, on the other hand, was someone who said unfunny things in an unfunny way, and for some reason, people laughed. To demonstrate this, he delivered an innocuous line – something along the lines of “Mr. Jones, sit down, I’d like to talk to you about your son” – twice. The first time, he said it as though he were in a drama, and the response was muted.

Then he told us that he was going to say the exact same unfunny line as Lt. Frank Drebin, in an unfunny way, and he did exactly that, and the audience exploded. It wasn’t just indulging him as prompted, either. Without actually tilting his delivery in that direction, Nielsen made it genuinely funny. To underscore his point, he then broke character with a look of happy exasperation and basically said, “See?”

He didn’t sell jokes or wink to the audience, but played it blank. He’s the nowhere man of dramatic acting, working to disappear into banalities until his voice is a low purr and the sound of words becomes more important than their meaning. You pay attention to the surface of things with Nielsen’s jokes, the way he harrumphs and says “Well” before a police car bursts into flame in the distance, or the hard emphasis he puts on the “p” in “poopy pants” (from an epic verbal duel with Robert Goulet in Naked Gun 2 1/2).

But the arc of Nielsen’s career is so much vaster than his sublime work with ZAZ and the later parodies (all of which are underrated to some degree, especially Dracula: Dead and Loving It); I had to delve into his TV work to see where he began. The usual line is that Nielsen was a rather bland handsome leading man until ZAZ tapped his natural talent for deadpan. But there are some raucous early performances that tend towards paranoid men suffering from quiet desperation. Even when he went prematurely gray and became a stock network guest star he gives his roles edges of self-absorption and arrogance.

Tales of Tomorrow is an early gem, a science-fiction anthology show that aired live on ABC from 1951 – 1953. Nielsen acted in six episodes, three of which are available on the site. In “Ghost Writer” (1953) he’s a struggling novelist who takes a gig polishing stories for a successful author. Then his tales start coming true.  “Appointment On Mars” (1952) finds him on the red planet struggling to contain the paranoia of his crew and his own madness as Uranium deposit riches loom (it’s Treasure of the Sierra Madre in space). And “Another Chance” (1953) casts him as a desperately poor husband who steals a valuable brooch and then undergoes a memory erasure procedure to start life anew. In all of them he’s on the edge of madness, which the cramped sets and long takes of the live TV medium really enhance.

He’s only a few years out from his NYC training at the Neighborhood Playhouse, which was under the sway of Sanford Meisner’s version of Stanislavski’s “system”, now known as the Meisner Technique, and similar to Lee Strasberg’s famous “method”. Nielsen’s tight, raging performance in  “Another Chance” is the closest to the method he’d ever get. It’s a bracing, moody piece where he’s knocking back liquor in the first shot and gets more disoriented from there, until he gets his mind wiped by a supercilious doctor. Eventually his repressed past starts drilling back into the present, with Nielsen’s language expertly slipping into the names and places of his former life. It’s a mannered but powerful performance in this surprisingly complex forerunner of  Eternal Sunshine of the Spotless Mind .

Even the lax Hitchcock Presents episode, “The $2,000,000  Dollar Defense” (1958), finds Nielsen self-destructing. Here he’s a cuckolded husband accused of murdering his wife’s lover. The method intensity has worn off, and the cool Nielsen persona is setting in, introducing hints of snobbery and elitism to his emerging suave demeanor. A similar scenario pops up over 20 years later in George Romero’s Creepshow (1982, the same year as his comedic breakthrough with ZAZ, Police Squad). In this theatrical horror anthology (he’s an unsung hero of the form), Nielsen plays another husband with revenge on his mind. This time he buries Ted Danson in the sand, hoping to drown him in the tide. In keeping with the self-reflexivity of the whole enterprise, he hams it up, whistling “Camptown Races” as he leads Danson to his doom, and bitchily snapping off lines like “She’s waiting for her knight in shining corduroy” before watching W.C. Fields on TV.

But that’s not nearly as jolting as his appearance on Rod Serling’s horror anthology Night Gallery in 1971 (“A Question of Fear”) as an eye-patched and mustachioed war veteran challenged to spend the night in a haunted house. Claiming to have never felt fear, Nielsen’s hyper-masculine Colonel swashbuckles his way into an old dark house. There is very little dialogue as he navigates soldier-ghosts with burning hands, swinging blades and probable poisons. The final act is expository lard, but the Colonel is another example to place in Nielsen’s hubris-filled menagerie.

There were undoubtedly instances of the stoic network hero during his long TV career, like on the Disney show The Swamp Fox, but they are not readily viewable. But what is available shows that he played far more than just the “earnest heroes” that the NY Times described early on in his career. Even the most straight-laced roles, like his two guest spots on Murder, She Wrote (both on Netflix Instant), contain hints of self-absorption and menace. In “My Johnny Lies Over the Ocean” (1986),  he plays a cruise liner captain with barely contained arrogance, hitting on the intrigued Jessica Fletcher with intransigent persistence. Then, in “Dead Man’s Gold” (1986), he plays a former flame of Jessica’s, but one profligate with money and in hock to a pair of well-mannered loan sharks. With a charismatic swagger barely masking his self-destructive tendencies, he gives Jessica a romantic kiss-off.

Nielsen’s genius was codified in Airplane!, Police Squad and The Naked Gun, but there’s a whole swathe of work to happily sift through if we want a fuller picture of his career. In the shift from the method theatrics of Tales of Tomorrow to the suave horniness of his Murder, She Wrote cads lies the DNA of Frank Drebin, a process of wearing down to the essential blankness of the Hollywood leading man, and to a deadpan for the ages.