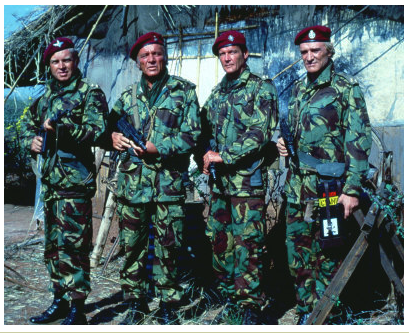 For as long as there are aging matinee idols looking for a quick paycheck, there will be commando movies there to pay them. While the painfully self-conscious Expendables movies brought this prestigious genre back into box office glory, it’s a format that has been cranking along for decades. Before Stallone, the most successful old man revitalizer was Andrew V. McLaglen (son of actor Victor), who cranked out fogey action flicks from the 60s through the 80s, after a long career in TV Westerns. Cult home video outfit Severin has just released The Wild Geese (1978) on Blu-Ray, which stars the leathery trio of Richard Burton, Richard Harris and Roger Moore. McLaglen’s favorite among his films, it is a bloody imperialist fantasy in which a group of ex-Special Ops Brits parachute into Africa to rescue a deposed leader from a tyrannical despot. Fitfully released in the United States as its distributor was going through bankruptcy, it exudes more testosterone per film frame than Stallone’s pec-flexing opus.

British producer Euan Lloyd had been interested in making a commando picture like The Guns of Navarone(1961) since he became an independent producer in 1968. It wasn’t until he read Daniel Carney’s unpublished novel The Thin White Line that he decided to make one. He purchased the rights in the mid 70s, and started developing the project at United Artists. Remembering a conversation with John Ford, who called McLaglen “a general in the field” according to journalist Tony Earnshaw, Lloyd hired him to direct. Ford was a friend and collaborator with his father Victor McLaglen, but those warm feelings didn’t transfer to United Artists, who wanted Michael “Death Wish” Winner to apply his brand of reactionary nihilism to the material. Lloyd balked, and brought the project to Allied Artists, who were happy to take on a film with that cast, despite the declining fortunes of Burton, fresh off of The Exorcist II (1977).

This was a fallow period in McLaglen’s career, filled with bills paying TV work following the unintentionally sexual title The Last Hard Men (1976), starring Charlton Heston and James Coburn. Ford’s recommendation was a godsend, as he told Wheeler Winston Dixon that he thought, “’I’m back in the big time, thank God’, because I had a little slump there.” The international success of The Wild Geese extended his extraordinarily long career into the 1990s.

The setup is simple: Richard Burton is a retired special operations officer hired to rescue the deposed leader of the made up country of Zembala. He gets his old team together, including operations planner Richard Harris, explosives expert Hardy Kruger and smirking muscle Roger Moore, who looks happy to be cashing a paycheck in an inter-Bond year (between The Spy Who Loved Me (’77) and Moonraker (’79)). The extraction goes off without a hitch, but the lily-livered bureaucrats strike a deal with the Zembala dictator and leave the group to be eliminated. Burton and his merry men have to blast their way out to survive, leading to the discomfiting images of a meddling, terroristic British force slaughtering the native African population for the audience’s pleasure.

Up until this point it is an efficiently entertaining action movie, with an energized Burton and Harris ably deploying the dry wit written by Reginald Rose (12 Angry Men). After Burton knocks back a scotch with a two-handed vise grip, he tells his employer, “my liver has to be buried separately, with honors”. This is the kind of offhand self-referential humor (to Burton’s well-known boozing), that The Expendables films telegraph with belabored obviousness (see: Schwarzenegger’s groan-inducing “I’ll be back” in the sequel). There’s no attempt to hide the stars’ advancing decrepitude, as the shock of grey in Burton’s hair and the enormity of Richard Harris’ glasses attest. Only the tanned and toned Roger Moore seems unaffected by the passage of time, content to hang out in the background and chomp on his cigar regardless of circumstance – which seems to be his character’s sole motivation.

McLaglen is a direct if inelegant filmmaker, his compositions clumping people in the middle of the frame. This makes action sequences legible, but renders them monotonous when repeated throughout the length of the movie’s 134 minute run time. The last third is almost entirely made up of undifferentiated machine gun fire and collapsing bodies. Hardy Kruger, who plays the voice of conscience in the group (and is thus killed off), told Earnshaw that “Andrew butchered my performance by not understanding that you can play a part by listening.” McLaglen is always cutting to action, whether it is shooting or talking, with no rests or pauses in between.  This careening style becomes as tiring and one note as its politics, which presents military intervention in Africa as an unspoken right of the British people. The Wild Geese is a fascinating relic, part of the lineage of imperialistic action cinema that is indebted more to John Wayne’s Vietnam War flag waver The Green Berets (’68) than the influential subversiveness of Robert Aldrich’s The Dirty Dozen (’67).