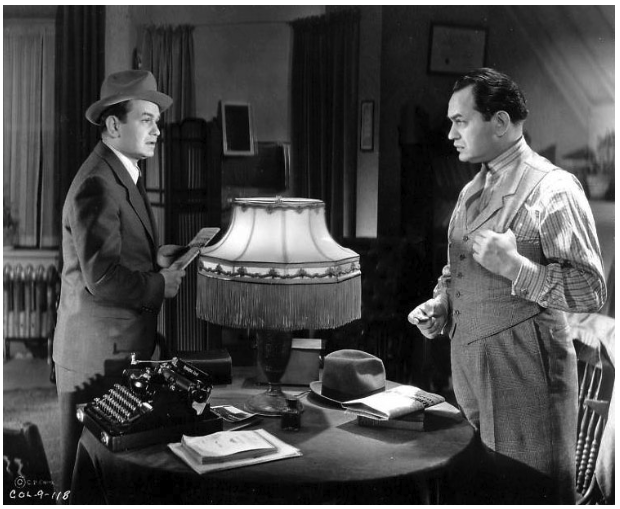 In an early Christmas present, the Museum of the Moving Image screened a 35mm print of John Ford’s unaccountably hard-to-see The Whole Town’s Talking (1935) this past Saturday. Unavailable on home video, aside from out-of-print VHS tapes going for $60 on Amazon, it deserves to be as well known as his Oscar winning drama from the same year, The Informer (his third film in ’35, Steamboat ‘Round the Bend, is no slouch either). A box office hit which revived the career of Edward G. Robinson, its descent into relative obscurity is puzzling, aside from the larger trend of studios choosing to ignore their own history. It has not even been released on Sony/Columbia’s DVD burn-on-demand service, which was made for titles like this.  In any case, it is an elegantly constructed farce that showcases the astounding range of Robinson, who can play delicate meekness and gruff murderousness for equal laughs.

John Ford made The Informer at RKO, Steamboat ‘Round the Bend for Fox, and The Whole Town’s Talking for Columbia, a free agent playing the field for quality projects and paychecks. While Ford had to fight for The Informer to get made at RKO, The Whole Town’s Talking was pitched to Harry Cohn at Columbia by independent producer Lester Cowan. He was selling Robert Riskin and Jo Swerling’s script, which was adapted from a short story by moneymaker W.R. Burnett (Little Caesar). Riskin was a frequent collaborator of Frank Capra, and The Whole Town’s Talking is sandwiched in between his work in It Happened One Night (1934) and Mr. Deeds (1936). His script for Ford exhibits a Capra feel, in that it concerns a mild-mannered worker or vagabond thrust into extraordinary circumstances, as in Deeds or Meet John Doe.

Arthur Jones (Edward G. Robinson) has never once been late to work at the J.G. Carpenter accounting firm, but his regimented life becomes upended when escaped mobster “Killer” Mannion (also Robinson), turns out to look exactly like Jones. The cops immediately arrest Jones, and he becomes a minor celebrity for being a murderer’s look-a-like. Then Mannion decides that Jones could be of use to him, and the two engage in a roundelay of identity swaps that confuses the cops, their friends and in the end, themselves.

Ford sets up the city as fidgeting mass of humanity, so large and indistinguishable that two people could swap identities with ease. He opens the film with a tracking shot that surveys the faceless workers at J.G. Carpenter, all hunched over their desks and pecking away at their number machines. Later, when Jones is apprehended, the police and the press are depicted as yammering mobs, filling the frame with shouts and bravado as Robinson cowers in a corner. Robinson plays Jones as a man who desperately wants to fit in and disappear like the rest of his colleagues, quiet and recessive.

From the beginning, though, fate is against him. His alarm clock breaks, and he arrives at work late for the first time in almost a decade. Standing out alongside him is Miss Clark (Jean Arthur), who sashays into work even later, in a nimbus of cigarette smoke. Jean Arthur’s entrance here is a marvel of physical control, sucking in one last draw before the door, flicking away the butt an instant before entering, and then exhaling the smoke in the instant after crossing the threshold – a perfect puff of insouciance. It unravels as one continuous gesture, a perfect performance that takes only a few seconds of screen time.

How does such a magical scene happen? Arthur described John Ford’s directing style on the film to Joseph McBride in in his essential Searching for John Ford bio:

Ford always had a handkerchief or a pipe hangin’ out of his mouth. He chewed on it and you never knew what he said. And Robinson had a pipe that he’d chew. They’d stand there, these two guys, and never give you any directions at all or anything much. I’d say, ‘How do I know what I’m gonna do if you don’t talk?’ And they said, ‘Well, we talk with our brains. We don’t need to verbalize things.’…You know what he’s thinking anyway. He’s just – it’s all over him. A darling, darling man. I don’t think he gave much direction, but everybody seemed to understand what they were supposed to do.

Ford trusted his collaborators, which comes across in the moments of offhand beauty like Arthur’s entrance. As Miss Clark she is the willing outsider, Jones an accidental one, although he fervently desires to win her hand, leaving facile anonymous love poems on her desk.

It is only when he encounters Mannion, and discovers a similar animalistic quality in himself, that she shows any interest. He awakens this flicker of attraction in her after boozing it up with the boss, who is looking to curry Jones’ minor celebrity into publicity for the firm. He plies Jones with cigars and whiskey, and Robinson gives a master class in queasy reaction shots. He holds the cigar as if it were radioactive, his hand underneath, pinching it with thumb and forefinger. Ford holds the reaction even longer after he knocks back a shot of liquor, his face full of micro-narratives of disgust, fear and a flickering of acceptance. It is an uproarious sequence that ends with a woozy Jones  smooching Miss Clark and kissing off the rest of the office with a slurred, “so long, slaves!”. Jean Arthur’s smile at this subversive action reveals that she has ID’d one of her own kind.

When she encounters Mannion, she senses the sociopath instead of the subversive. Robinson plays Mannion with a five ‘o clock shadow and an inferiority complex. He speaks in staccato bursts and narrows his eyes into slivers, but at the merest hint of criticism he blows up. Mannion’s darkness cloaks the farce – there are real mortal consequences to all the ridiculous circling of the sub-Keystone cops and press corps. In order for Jones to survive and win the girl, he is forced to kill, or at least abet a killing, and it is that ferocity which attracts her. It is this violent undertone which gives The Whole Town’s Talking its curious power, and is what connects it to the wider current of Ford’s work.  Jones/Mannion are the comic versions of what will later emerge as the dueling impulses of The Searchers’ sadistic hero Ethan Edwards.