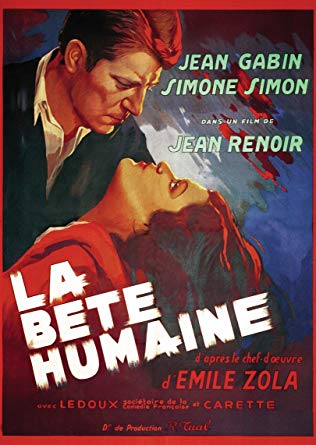 Following the transformative success of Grand Illusion (1937), Jean Renoir suddenly had an overwhelming number of opportunities. There was an offer on the table from Samuel Goldwyn to come to Hollywood, though he delayed his route there, at least temporarily. Instead he would direct the panoramic French Revolution drama La Marseillaise (which I will write about later in my Renoir series) and our subject today, La Bête Humaine. The latter is a moody death-haunted drama adapted from the Emile Zola novel, returning to the author’s work for the first time since Nana (1926). A grimly fatalistic tale about a train engineer’s inbred compulsion to murder, and his desperate attempts to restrain it, it is graced by an iconic Jean Gabin performance that attempts to go beyond good and evil.

Though Renoir was in a position of much greater power, La Bête Humaine was another project he came onto late, after it had been developed and dropped by numerous other artists. As detailed by Pascal Merigeau in Jean Renoir: A Biography, the film had begun its life with director Marc Allégret and writer Roger Martin du Gard in 1933. Producer Philippe de Rothschild sold the screenplay to Marcel L’Herbier, who was also unable to get it off the ground. On a separate track, Jean Gabin had agreed to star in a project called Train d’enfer, as it was a long-held dream of his to drive a locomotive. Jean Gremillon and Marcel Carné successively passed on directing it, and in leaving Carné suggested that if Gabin wanted to be a train engineer, producers Robert and Raymond Hakim should just film Zola’s La Bête Humaine. In acquiring the rights they gained access to Martin du Gard’s script (he had since become much more famous since winning the Nobel Prize in Literature), which Renoir trashed upon taking over production. He wrote his script in a self-reported twelve days. Martin Du Gard moved Zola’s time period from 1869 to 1914, but Renoir’s version brought it up to contemporary times, thinking that, “such action taking place amidst trains standing on wheels high above the ground and around wooden rail cars would have lost some of its dramatic intensity….Also, because the France of today isn’t that of Napoleon III, because of the way it is now, its qualities as well as its flaws, I believe it deserves to be defended through and through by its children.”

The screaming futurism of the coal-belching iron train is integral to Renoir’s vision of the original text, which at various points he has claimed to have never read all the way through. He was probably joking, but in any case the film version places the central character, Jacques Lantier (Jean Gabin) in the train engineer’s cab, his face blasted with soot as he sticks his head out the window like a panting dog. Lantier has a history of depressive, violent episodes, which he ascribes to inherited guilt from his alcoholic ancestors. As the Zola quote at the head of the film says, “He felt he was paying the price for the generations of his forefathers whose drinking had poisoned his blood.” He can’t drink a drop himself, but still enters violent fugue states which he cannot control. And so he has segregated himself from society, choosing to live alone, preferring to engage with the world as a blur outside his train window.

But then he gets entangled in the affairs of Severine (Simone Simon), an unhappy young wife to stationmaster Roubaud (Fernand Ledoux). Severine has a tangled past of her own, and when Roubaud discovers it he enters a murderous rage, killing Severine’s godfather on a moving train. Lantier was on that same train car when the murder took place, and saw Severine exit the cabin at the time of the crime. Entranced by her wounded catlike beauty, he lies to the police and hides her secret. He falls in love with her, and she with him, though both are drawn to self-destructive acts. Severine becomes convinced that the only way out of her predicament is for Lantier to kill Roubaud, and then they can escape together…somewhere. But murder only begets murder, and Severine and Lantier set loose their demons on each other until the only escape is death.

Lantier is a devilishly difficult character to portray, a victim of fate and genetics who still, in the end, commits heinous acts. He is something of a monster, and yet Gabin’s sensitive, wounded, and defeated performance imbues him with what amounts to a soul. He shows a man who fought against and instincts and lost, now playing out the string until he does himself in for good. He is soft-spoken, almost mumbly, his words receding as soon as he says them. It is a proto-Brando performance, and turns makes Lantier a sympathetic monster instead of  a pathetic one. Simone Simon has less to work with, her character is more of a means to an unfortunate end -but exudes a wounded, capricious spirit.

In a film of great performances, one sequence stands out. It is Renoir himself playing the character of Cabuche, drifter and former childhood friend of Severine. He is the one unjustly fingered for the murder on the train, for some uncouth comments he made afterward. He is brought in for questioning, and this rather brusque fellow, who killed a man in prison, launches into a nostalgic reverie about picking strawberries in the summer, looking for chestnuts in the fall, walking through the forest hand in hand with this girl who was nice to him when he was otherwise shunned. His soot-covered face softens, his head bowed with the weight of his memories. It is one of those diversionary Renoir moments when the entire life of a minor character blooms forth, overspilling with love and admiration. It is this kind of love that Lantier and Severine don’t seem to be capable of, weighed down as they are by their mutual maladies and disgust with the lives they have been given. Oftentimes I would wish the film would wander off more like that Cabuche monologue, pull itself free of the ever-constricting doom enveloping Lantier and Severine. But those two star-crossed lovers free themselves in their own way, the only way they know how.

This is the eighth part of a series covering the films of Jean Renoir, 16 of which are streaming on FilmStruck. The previous entries: