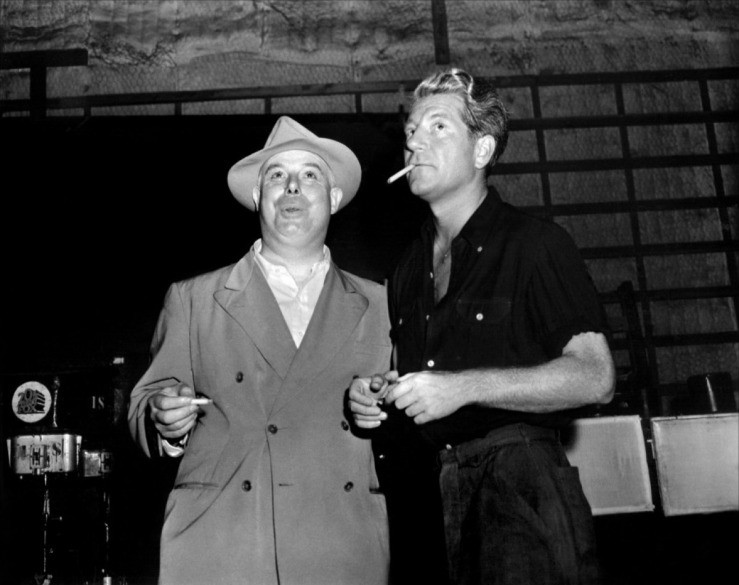 “That man who makes films where people spit on the ground.” – Jacques Schwob d’Héricourt (producer) on Jean Renoir

When the funding ran out on A Day in the Country (1936), Jean Renoir left that film unfinished to start casting on The Lower Depths (1936). An adaptation of Maxim Gorky’s play starring Jean Gabin and Louis Jouvet, it was a major step up in budget from the independent operation he was leaving. The Lower Depths captures the changing fortunes of Gabin’s flophouse thief and Jouvet’s gambling Baron, their lives intersecting up and (mostly) down the social ladder. Production started on September 5, four months after a coalition of leftist groups known as the Popular Front swept into office in France. Renoir was becoming one of the public faces of the movement, writing articles for the Communist paper L’Humanite and attending meetings and screenings at the Ciné-Liberté, a self-described “worker’s cooperative for variable-capital production” that would battle “against the ill fate with which film is saddled”. The political Renoir was not the artist Renoir, however, who took his production money wherever he could get it. The Lower Depths, for example, was produced by Films Albatros, which was founded by White Russians who fled the country before the 1917 revolution. While restricted somewhat by its stagebound material The Lower Depths still contains remarkable scenes of downward mobility, highlighted by Louis Jouvet’s smirkingly disgraced Baron, who finds a home dozing in the grass.

Les Films Albatros was founded in 1922 by Alexandre Kamenka, who moved to Montreuil shortly after the revolution – they had produced Le Brasier ardent (1923), which was one of the movies that inspired Renoir to get into filmmaking. Renoir biographer Pascal Merigeau writes that a flood of Russian-themed films were produced in France after the success of the Popular Front, like Taras Bulba (1936) and Rasputin (1936/’37). Most of these were panned by L’Humanite, they headlined their Taras Bulba review “Some White Russians Make a French Film.” Working with Les Films Albatros was politically troublesome but professionally wise, they had the money to go swiftly into production, and Renoir, more than anything, wanted to work. So he accepted Kamenka’s offer to adapt Gorky’s play. The original script was written by Yevgeny Zamyatin, author of dystopian novel We, which would be banned in the Soviet Union. Zamyatin left the Communist Party in 1917, and was only permitted to leave the country after he directly petitioned Stalin: “For a writer such as myself, being deprived of the possibility of writing is equivalent to a death sentence.” He was allowed to leave for Paris in 1931, after the personal intervention of Maxim Gorky.

Zamyatin wrote the script with Jacques Companeez, which Renoir then thoroughly revised. Renoir recalled that their version was “very poetic, but absolutely impossible to film.” One of the major debates was where to locate the film – make it Russian, relocate to Paris, or keep the locale indeterminate. Renoir decided on the last option, but at the last minute there came pressure from the Communist Party to make the film Russian, because they “wouldn’t accept the work of the great Gorky presented as anything other.” So what we are left with is an unknown city and French actors, but with Russian names, the film having a very vague specificity. It was vague enough to receive widespread praise, receiving plaudits in L’Humanite, winning the inaugural Louis Delluc prize for best French film, and by the end of the year Renoir would receive the Cross of Chevalier of the Legion d’honneur from the government. One of the only sour notes was hit by André Gide, a fellow traveler who became disenchanted with Communism after a trip to Russia – he called the film, “unworthy of Renoir.”

The film focuses on the relationship between the underworld thief Pepel (Gabin) and the inveterate gambler Baron (Jouvet). They meet fortuitously when Pepel breaks into the Baron’s home, who welcomes him with open arms for a night of drinking and card games. For the Baron had lost his fortune at cards earlier in the evening, and all his possessions would be repossessed soon enough anyway. Pepel lives at a flophouse run by slum landlord and fence Kostylev (Vladimir Sokoloff) and his wife Vassilissa (Suzy Prim). While carrying on a fitful affair with Vassilissa, Pepel’s true affections lie with Vassilissa’s sister Natascha (Junie Astor). After dispensing with his final assets The Baron joins the flophouse and becomes a dispenser of cynical wisdom, while Pepel tries to convince Natascha to run off with him. But Kostylev is trying to pawn off Natascha on an inspector to keep him off their case, and will resort to abusive ends to keep Pepel away from her.

Pepel is a similar figure to Boudu in Boudu Saved From Drowning (1931), one who espouses the life of  a drifter (they both love dozing in the grass), who gets wrapped up in the moneyed classes problems. What makes Boudu a greater film is its refusal to engage in middle-class melodrama – Boudu just cuts loose and sails down a river. The Lower Depths has plenty of tempo-braking speechifying and plot-lengthening manipulations. But the performances often lighten the lugubrious load. Jouvet has a face like Dr. Seuss’ The Grinch and uses each face wrinkle at max capacity, though usually for a bemused smirk. The Baron watches his world disappear around him as if lessening a load. Jean Gabin’s Pepel is still weighed down, despite all of his paeans to bummin’ it, he is getting sick of living so close to death and despair – one of the most moving sequences finds him speaking with a sickly lady, stating that “death is like a mother to us”, us being the poor. For The Baron poverty is a choice, but for Pepel it has become a curse he is trying to escape. Renoir and his DP Fédote Bourgasoff create a visual scheme of floating dolly shots for The Baron’s upper class escapades, and locked down shot-counter-shots for Pepel’s working-class wanderings. The Baron can move easily, while Pepel is nailed down. This visual schema is broken up by the end, shifting along with their fortunes. The final image would be influenced by a private screening Renoir received of Modern Times (1936) before it arrived in French theaters, ending on a backwards tracking shot of Pepel and Natascha strolling towards the camera, their fates realigned.

This is the sixth part of a series covering the films of Jean Renoir, 16 of which are streaming on FilmStruck. The previous entries: